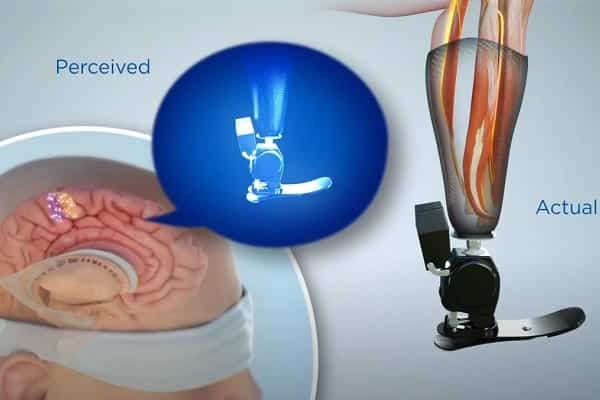 All human skeletal muscles work in pairs, which allows us to both flex and extend our joints. The mechanical benefit of this is obvious. What isn’t so obvious is the critical role it plays in our brain’s ability to perceive body position and movement. Scientists are now utilizing this ability to improve user control of bionic limbs and to reduce phantom pain.

Proprioception is the brain’s ability to perceive the position and movement of the body in space. This does not involve a sense of touch. Rather, the brain retains a mental map of the body. When muscles move, this information is passed through nerves to the brain, which automatically adjusts its map. This is the natural mechanism that allows you to close your eyes yet still touch your finger to your nose.

When you move a limb, the contraction of one muscle (the agonist) results in the extension of another (the antagonist). It is this dynamic that generates the nerve signals to tell the brain what has happened.

In traditional amputations, agonist-antagonistic pairings are often severed. As a result, the brain loses much of the feedback that it needs to track a severed limb’s position. This loss also seems to contribute to phantom pain.

The Goal of AMI

AMI is a method to provide proprioception from a synthetic device to the human nervous system. It was invented by the Center for Extreme Bionics at the MIT Media Lab.

AMI’s main goal is to improve control and positional awareness of a bionic limb. However, it achieves this somewhat indirectly. First, agonist-antagonistic muscle pairings are surgically recreated, one for each bionic joint that is to be controlled.

Even without the attachment of a bionic device, this improves the connection between the brain and its residual limb. If the user closes his eyes and attempts to flex his missing foot upward, the associated muscle pairs will contract/extend in response, and the brain will receive information about this movement.

In other words, the surgical procedure itself restores a degree of natural proprioception.

This short video provides an excellent description of the impact that AMI has on related brain activity:

As beneficial as AMI is in terms of reconnecting the brain to the muscles in a residual limb, most amputees don’t want to just move their phantom limbs. They want to interact with the real world. Here, the role of AMI is somewhat more complex. To explain this, we’ll use the example of a bionic ankle/foot.

If you have read our article on Bionic Leg & Foot Control Systems, you will know that most current bionic lower limbs do not share any kind of connection to the user’s brain. Instead, local sensors monitor the position, movement, and speed of the bionic joint many times per second and transmit this information to a microprocessor. The microprocessor interprets this information and adjusts the bionic joint accordingly.

For example, here is how Blatchford’s Elan bionic foot/ankle adjusts when ascending a slope:

This is a wonderful innovation but it is entirely reactive. The foot must first experience the terrain before adjusting to it.

Scientists have been exploring the use of myoelectric control to make the process more proactive. The idea is that:

This solution is obviously an improvement over a purely reactive system but it still suffers from a major flaw: the brain has poor awareness of the bionic limb’s position. As a result, the user must visually guide key aspects of the limb’s movements, which is not only tiring but can also impair multi-tasking.

AMI-based systems eliminate this major flaw. They still use myoelectric sensors to detect muscle movements, and these signals are still translated into commands for the bionic limb. The difference is that the control system for the bionic joint is specifically calibrated to the muscle actions of the restored agonist-antagonist muscle pair. Because of this, the brain can sense the position of the joint by interpreting the natural feedback from that muscle pair.

This restored proprioceptive sense makes it possible to control the bionic limb without having to look at it. For example, an AMI user can approach a set of stairs the same way that a person with natural limbs does: by glancing at the stairs, letting the brain intuitively calculate the geometry of the situation, and then simply relying on the brain’s proprioceptive sense of the bionic limb and the improved control system to carry out the required movements.

As an added benefit, it appears that AMI reduces phantom pain (likely by restoring the brain’s connection to its missing limb) and also reduces muscle atrophy in the residual limb.

All in all, this is a truly beautiful solution.

The one thing missing from an AMI solution is a sense of touch where information from artificial sensors on a bionic limb is communicated to the user’s brain via nerve stimulation.

This is desirable because it helps the user connect to the outside world and may further reduce phantom pain. But surgery is required to implant electrodes to stimulate the nerves, which can have significant drawbacks:

There is also a problem with precision. It is notoriously difficult to precisely stimulate a nerve with an electrode. As a result, touching an object with a bionic forefinger may be accidentally interpreted as touching it with the pinky instead, which could lead to a certain amount of clumsiness. To make matters worse, recent research indicates that the brain is not capable of adjusting its sensory map to overcome such errors.

Given the obvious benefits of AMI and the risks/limitations of current sensory feedback technologies, it’s reasonable to ask if an AMI solution can satisfy most user needs without sensory feedback. The answer to this question may differ for lower-limb vs upper-limb bionics.

To recap, implementing AMI will give users improved control over a bionic limb by restoring the brain’s awareness of the limb’s position.

When it comes to lower-limb bionic devices, what kind of additional sensory feedback is needed?

Simple contact is probably at the top of the list. Knowing that the toe of your bionic foot hit an obstacle that you were trying to step over is an early indicator that you might stumble or fall. The same might be said of stepping onto a hard vs soft surface, as this would allow the user to adjust his stance for optimal shock absorption. But there are other sensory clues to these events, such as sound or vibration.

Knowing that you’ve stepped onto a slippery surface or an uneven terrain might be helpful, but the first consequence of such situations is always sudden movement, which might be communicated to the brain via AMI. It could also be dealt with to some extent by the bionic limb’s local sensor and microprocessor system.

Being able to sense temperature cannot be reproduced by other means, but this ability has very few use cases, and bionic limb designers always have the option of making the user aware of unsafe situations via audible alarms or stimulating the skin under the socket using small vibrators or transcutaneous electrical nerve stimulation (TENS).

The fact is, once you create a working proprioceptive sense for a bionic lower limb and dramatically improve user control, adding advanced sensory feedback seems to offer only limited functional value.

This is not the case for bionic upper limbs.

When we first wrote this article, we stated that AMI had not yet been used for an upper-limb patient but that scientists believed it would work just as well as it had for lower limbs.

Well, it turns out that an upper-limb patient has undergone the procedure and has even been fitted with a bionic hand.

The results so far have been very encouraging.

This is very exciting news. We don’t want to get ahead of ourselves but this could be a major breakthrough for end-user control of bionic hands.

That having been said, bionic hand users will still require full sensory feedback from their bionic hands in addition to the proprioceptive awareness described by this patient.

To understand why, imagine opening a locked door with a natural hand. Once you glance at the lock, there is no need for you to continue looking at it. You simply reach out, make general contact with the lock, and then use sensory feedback to adjust your fingers as needed.

If you have a bionic hand and have undergone AMI surgery in your forearm, you would likely be able to reach out for the lock the same way that you would with your natural hand, but here is where a lack of sensory feedback would inhibit you. If you don’t grasp the lock perfectly, there is no way for you to adjust your finger position without detailed visual guidance.

The same could be said for most upper-limb tasks. AMI might be part of a package that eliminates the need for advanced sensory feedback in lower-limb bionics — and we emphasize the word “might” here — but it has no hope of doing the same for upper-limb bionics. People need to feel with their hands, period. For more information on this subject, see Sensory Feedback for Bionic Hands.

AMI has only been around since 2016 and has only been used in a few dozen cases. In every case, AMI has been implemented as part of the amputation surgery itself, which is the ideal time to incorporate this new approach.

But what if you have already had your amputation? The good news is that it appears possible to leverage the regenerative capabilities of nerve and muscle tissues to build an AMI in a follow-up surgery. Scientists are expecting to run trials on this technique in the near future.

Implications for the Future

One of BionicForEveryone’s main missions is to help those with disabilities to understand the technology options available to them free of commercial influence. Because we have nothing to sell, we don’t mind describing new or pending technologies that may cause end-users to postpone planned purchases in favor of better options down the road.

This is one of those options. We believe that AMI is so groundbreaking that, if possible, anyone facing amputation from this point forward should explore whether they can incorporate AMI into that surgery, even if the goal might be just to preserve the possibility of better control and restored proprioception for a bionic device at some later point.

AMI is not the only surgical technique that can improve user control over bionic limbs. For a list of others, with links to an article on each, please see Surgical Techniques That Improve the Use of Bionic Limbs.