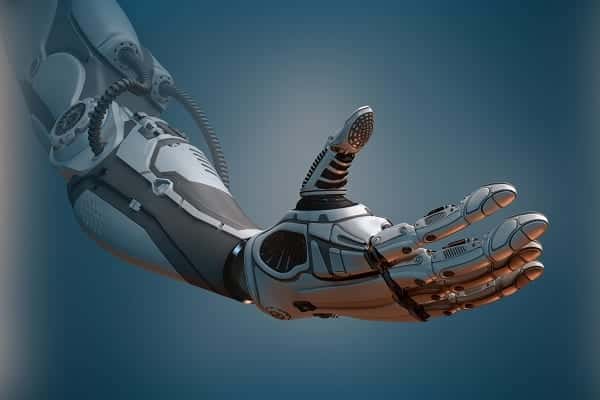 When looking at a bionic arm, many people believe that the hand and the arm joints are the primary technology components. This is not true. It is the user control system that holds the key to restoring near-natural capabilities.

Most of the bionic hands in use today utilize myoelectric direct control systems.

This means that either one or two myoelectric sensors are built into an arm socket so that they lie against the skin of the residual limb. Their job is to detect muscle movements intended to:

Bionic hands usually offer multiple grip patterns, i.e. different combinations of fingers and the thumb open and close depending on the selected grip. The co-contraction signal (or possibly a double-open or double-close signal) is often used to rotate between the available grips.

This type of system is described as “direct control” because the user must explicitly contract specific muscles to directly control grip selection and the open & close actions. It is not ideal for controlling above-the-elbow bionic arms because it does not generate enough distinctive signals to manage the hand, wrist, elbow, and shoulder joints, if applicable.

Sensory feedback in this type of system is also limited. Typically, it involves placing pressure sensors in the bionic fingers and triggering small vibrations in the socket to indicate contact and/or the degree of resistance. However, it may also be possible to indicate slippage, temperature, or the sharpness of an object by stimulating the residual limb’s skin in other ways.

Newer versions of bionic arms/hands now offer myoelectric pattern recognition as an alternative to direct control. In this model, multiple sensors are used, typically from 8 to 16.

Using a bionic hand as an example, the mapping process occurs as follows:

The resulting control is far more intuitive because the user doesn’t have to explicitly control the hand. He just thinks about moving his phantom arm/hand exactly as if it were still present and the bionic version will mirror his intent.

It doesn’t matter which patterns of muscle movement are mapped to specific actions as long as the patterns can be differentiated from each other and are reasonably consistent. We say “reasonably” because artificial intelligence (AI) is used to identify patterns and can adjust for minor variations.

This same mapping process also applies to movements of bionic wrists, elbows, and shoulders, if present. The movements of different components can even occur simultaneously, as they do with natural arms/hands.

We’re not going to cover this option in great detail — we just want to make readers aware of it.

To avoid the problems with maintaining proper contact between sensors and the skin, one option is to surgically implant the sensors into the target muscles of the residual limb.

This approach is often used in combination with a process called “Targeted Muscle Reinnervation”, where nerves that once controlled muscles subsequently lost to amputation are surgically reassigned to new muscles. Since the patient is undergoing surgery anyway, it makes sense to embed the sensors.

However, other than the physical placement of the sensors, there is no difference in the nature of the control system, i.e. it is still a myoelectric pattern recognition system, which is why we’re not covering it in more detail.

AMI is a technology that revolves primarily around surgically restoring the agonist-antagonist muscle pairings that control our limbs. Basically, severed muscles in the residual limb are reconnected to form such a pairing:

This restores the brain’s natural sense of position and movement for the missing limb. This is called “proprioception”.

A bionic joint is then calibrated so that its movements correspond to the movements of the restored muscle pair, and, voila, the brain can better control the bionic limb with thoughts and also sense its position in space.

All of that is a gross over-simplification, but you can get the full story by reading our complete article on AMI.

The point here is that, in terms of controlling a bionic limb, this is still a myoelectric system. It’s just one with a much better connection between the brain and remaining muscles in the residual limb. Also, there is less muscle atrophy when an agonist-antagonist pairing is restored, so the muscle movements are stronger. So, in this respect, AMI is about generating much clearer myoelectric signals, both in terms of user intent and signal strength.

Once a bionic limb is set up so that its movements correspond to the movements of the muscle pair, visual cues then reinforce this model, i.e. the user attempts to raise the front of his foot toward his shin, the muscle pair responds accordingly, the bionic foot mirrors this movement, and the user’s eyes confirm it. This creates a closed-loop control system.

Note that we are referencing a lower-limb implementation of AMI in the preceding paragraph. This is not by accident. Although scientists believe that AMI will work for upper limbs, this has not yet been tested.

Until the development of AMI, we would have said that the ultimate method of connecting a user’s mind to a bionic arm/hand is through a neural interface. We still hold this view when it comes to sensory feedback, but we now believe that some combination of AMI and pattern recognition may be sufficient for user control, especially if combined with sensory feedback.

Nonetheless, we’ll describe neural interfaces in this section as if AMI doesn’t exist.

The main goal of a full neural interface is to facilitate two-way communication between the user and his bionic arm/hand. By two-way, we mean a system supporting both user control and advanced sensory feedback.

There are a few ways of doing this. In the simplest model, control is still achieved by using implanted myoelectric sensors, while sensory feedback is transmitted from sensors on bionic fingers to implanted electrodes attached to sensory nerves. The electrodes then stimulate the nerves to “trick” the brain into feeling the correct sensation(s).

A more advanced model uses implanted sensors/electrodes to interact directly with both motor and sensory nerves. As far as we know, this type of system is currently confined to the laboratory.

Finally, companies like Integrum are offering two-way neural interfaces as part of an osseointegrated implant:

These are all very promising models. However, it should be noted that surgical implants of any kind do pose risks like infection and scarring, not to mention significant added cost.

Also, just because implanted sensors eliminate most of the problems with maintaining skin-surface contact doesn’t mean that they are perfect. Scar tissue can form around the embedded sensors and reduce their ability to detect signals.

The real gain here is with the sensory feedback part of the system. Not only can users experience basic feedback like contact and pressure. Work is also underway to reproduce other facets of touch, such as shape, slippage, and even temperature.

Sensory feedback can also dramatically improve user control for finer hand movements because it allows for small, interactive adjustments between the brain and the bionic hand based on that feedback, which would reduce the user’s reliance on visual guidance.

For example, think about what happens when you pick up a pen to write with a natural hand. You don’t worry about how you pick up the pen. Instead, you grab it however you can. You then use a combination of sensory feedback and finger manipulations to move the pen into the right position.

This same brain/hand adjustment mechanism can be created via a neural interface, and that’s not all. By creating a sensory feedback loop between the bionic arm/hand and the brain, early research indicates that this may help eliminate phantom pain, effectively making the user feel whole again.

That’s the full promise of a neural interface, but, as mentioned above, some of this functionality may be provided by AMI instead.