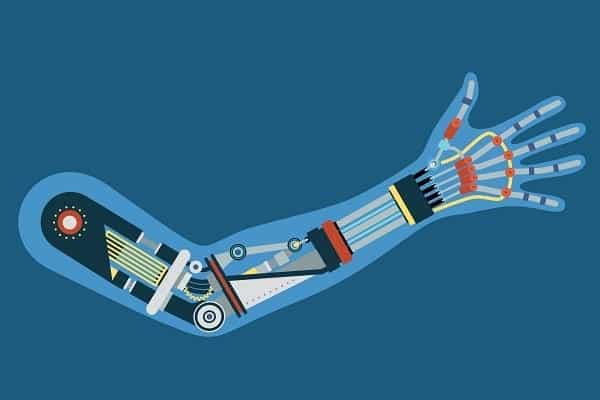 Bionic hands hold the promise of restored capabilities to millions of people. They look like natural hands and, when the conditions are right, behave like natural hands. The problem is, they rely on myoelectric control systems that continue to be unreliable in many real-life situations. In this post, we examine this problem and what can be done about it.

Much of this post contains negative information about bionic hands, but we’re not negative on them at all. We wholeheartedly believe that they’ll eventually restore near-natural capabilities to those with limb differences. For example, consider this short video by Myoelectric Outdoors on making breakfast using a TASKA Prosthetics Hand:

For these 53 seconds, can anyone doubt that this person benefits from having a bionic hand?

With a little homework, you, too, can end up in this kind of rewarding situation. That’s the good news. But first, you’re going to have to steer around a few pitfalls.

The Problems With Myoelectric Control Systems

As explained in our core article Understanding Bionic Arms & Hands, bionic hands often use a dual-site myoelectric control system to implement user control. Two sensors are placed on the residual limb’s skin to detect different muscle movements via electrical signals. One muscle movement triggers a close action in the bionic hand, while the other triggers an open action.

Exactly which bionic digits open and close depends on the hand’s selected grip pattern. For example, in a pinch grip, the close action causes the thumb and forefinger to pinch together. In a hook grip, the four fingers close while the thumb gets out of the way.

Most bionic hands support multiple grip patterns. Users can rotate between these patterns by using various methods, such as triggering two open actions in succession.

That’s how it is all supposed to work. Unfortunately, there are significant technical challenges with this approach.

In a 2019 European study1, 15 prosthesis users and 7 therapists were interviewed about their perceptions of bionic hands. Their responses were classified according to specific themes and subthemes. Here’s a subset of the results:

We have not been able to find another recent study with a sufficiently large cohort that directly addresses user satisfaction with dual-site myoelectric control systems. However, a 2020 study 2 surveyed 449 users of upper limb prostheses regarding overall device satisfaction. Devices were:

As the participants in this study were all military veterans who received treatment between 2010 and 2015, it is highly likely that the myoelectric subgroup used single- or dual-site control systems.

In a bit of a shock, the survey found no difference in satisfaction by device or degrees of freedom (i.e. the different ways a device can move) between myoelectric, body-powered, and purely cosmetic devices.

Think about that for a moment. Despite the technological advances in bionic hands over the past two decades, users were no more satisfied with their functionality than they were with body-powered technology that has been around since 1812!

Looping back to the first study for a moment, their conclusions are similar:

“Prosthesis users and therapists described multi-function upper limb prostheses as more functional devices than conventional one-degree-of-freedom prostheses. Nonetheless, the prostheses were seldom used to actively grasp and manipulate objects. Moreover, the participants clearly expressed their dissatisfaction with the mechanical robustness of the devices and with the process of switching prosthesis function under conventional control.”

Further, indirect proof of this dissatisfaction comes from Alix Chadwell’s impressive 2018 thesis titled “The Reality of Myoelectric Prostheses: How do EMG skill, unpredictability of prosthesis response, and delays impact on user functionality and everyday prosthesis use?” 3

As part of her studies, she gave participants with a unilateral limb absence wrist sensors to monitor their at-home use of their myoelectric versus anatomical arms. Users overwhelmingly favored their anatomical arm, suggesting that we still have a ways to go before bionic arms reliably duplicate natural functionality.

None of this is exactly a vote of confidence!

In her thesis, Chadwell identified three key factors affecting control of a myoelectric arm (please note that I am paraphrasing here for simplicity):

Let’s examine each of these factors on its own.

In cases where the residual forearm is mostly intact, generating strong muscle signals may be as intuitive as mimicking the open and close actions of a natural hand.

When the forearm is not intact or is heavily damaged, users may be asked to use alternative muscles that require a lot more concentration and discipline. As with almost every physical activity, the ability to do this may vary significantly from person to person.

For myoelectric sensors to work properly, they need to maintain reliable contact with the skin. This is challenging enough in a static environment, such as a laboratory or prosthetist’s office. Real-life environments pose several additional challenges:

Scientists are attempting to overcome these challenges with increasingly sophisticated techniques, including:

Unfortunately, the real world is proving to be a rather tough nut. A 2020 study 4 indicates that pattern recognition accuracy declines by 13 % for limb position, and 20 % for contraction intensity, in real-world scenarios vs controlled environments.

According to a 2005 study 5, typical users may attempt 1,200 grasping motions a day with a bionic hand. If the accuracy rate of the myoelectric control system is only 80 %, i.e. an error rate of 20 %, this equates to hundreds of errors per day.

Factor #3: The Electromechanical Delay in a Bionic Hand’s Response to Detected Signals

When a person uses his or her natural hand, there is a delay of roughly 200 milliseconds between the time the brain issues the signal and when the hand acts upon it. More importantly to the “user”, there is no noticeable delay between the decision to act and the response.

Response times for bionic hands can be double or even triple this, depending on the user and/or task. Even where the difference is smaller, it is often compounded by other delays. For example, without a sense of touch, users must guide their hands through each motion visually, which is much slower than adjusting movements via tactile feedback.

These delays make control of a bionic hand much clumsier than that of its natural counterpart.

Now that you have a better understanding of the challenges when using a myoelectric control system, it’s time to describe the solutions.

Solution #1: Build Your Muscle Control From the Ground Up

If you scour research papers on myoelectric systems, you will not get a very clear sense of the training required to maximize your muscle control. Results often seem contradictory, with users plateauing or sometimes even regressing fairly early in the training process.

However, we found a study on multi-session game-based training 6 that seems to point to a more convincing way forward.

In this study, 30 participants underwent 10 training sessions of 30 minutes each over multiple days. A training game was used to keep the participants’ interest. Of particular note, assessments were focused more on the “foundational aspects of muscle control”, rather than testing functional prosthesis use.

We’re not going to share all of the results with you because you need to read the full study for proper context, but here is one quick example:

Notice the delayed return on investment until the fifth training session?

This next example measures the speed and accuracy of myoelectric control:

Again, you need to read the study to properly understand these results. The main point is that participants continued to steadily improve, for all ten training sessions, on key measures such as throughput and error rate. Would this improvement continue with additional training?

The main takeaway from this section is: if you are struggling to generate the muscle signals needed to control a myoelectric arm, don’t accept that you’ve reached your full potential just because you plateaued using traditional training methods. Talk to your prosthetist about the preceding study to explore how you can do more. You may even want to undergo this training before selecting your bionic hand and/or control system, i.e. to make sure that you’re testing against your fully trained muscles.

As you now know, ensuring the best possible contact between myoelectric sensors and your skin is crucial for maximizing myoelectric control.

As you also likely know, residual limbs are like fingerprints. No two are alike. This is also true of people, the tasks they need or want to perform, and the environments in which they exist.

It is also true of bionic arm systems. Sensors can vary in both quality and cost. The control systems that process and interpret sensor signals — the secret sauce of many bionic hand systems — also vary tremendously.

If you put all of these varying factors together, there is only one possible conclusion: you need a highly personalized bionic arm system.

How do you get this? In the very least, you need:

How do you get this kind of personal attention? Simple. You need a prosthetist who acknowledges the weaknesses of myoelectric control systems and is willing to put in the time and effort to help overcome them.

Solution #3: Choose a Bionic Arm That Has Solved the Delayed Response Problem

We love problems that other people have already solved. Have a quick look at this video, which demonstrates near-natural bionic hand speed:

…and this one, which demonstrates the usefulness of tactile feedback, which this bionic hand achieves by embedding pressure sensors in its fingertips:

In both cases, the bionic hand in question is the Psyonic Ability Hand.

To be clear, we’re not advocates of one bionic device over another. Our point in showing you these videos is to make you aware that solutions to the delayed response problem are already here. Given the way our competitive markets work, other bionic manufacturers either already have these capabilities or are likely working on them.

Knowing this, you should insist on finding out where your candidate bionic arms are in the development cycle. It would be a shame, after all, if you took delivery of one model of a device, only to find out that a soon-to-be-released version will have these important upgrades.

Bonus Tip: Talk to Others With Bionic Hand Experience

There is nothing as valuable as honest firsthand experience, especially when it comes to shopping for a bionic hand. How can you access this experience? Not through your prosthetist or a device manufacturer. There’s nothing nefarious about this statement. It’s just a simple human fact that, when asked for references, people tend to direct you to positive reviews only.

What you need is more balanced feedback. To get it, turn to your local charities and support groups for amputees and others with limb differences. Join one of the many Facebook amputee groups and post some questions or ask for advice. Don’t stop until you have talked to people that a) have a limb difference similar to your own and b) have experience operating a bionic hand using a myoelectric control system.

When you do this, make a list of everything that has annoyed or frustrated them. You’re about to navigate a long journey toward your ideal bionic hand, so you might as well know the pitfalls ahead of time!

Finally, we strongly recommend that you spend a bit of time watching the videos on the website mentioned at the start of this article, Myoelectric Outdoors. There are few people in the world with as much firsthand experience using myoelectric arms as the creator of that channel, and even fewer who can share their knowledge in such an accessible manner.

[3] Chadwell, Alix. University of Salford. (2020). The Reality of Myoelectric Prostheses:
How do EMG skill, unpredictability of prosthesis response, and delays impact on user functionality and everyday prosthesis use?