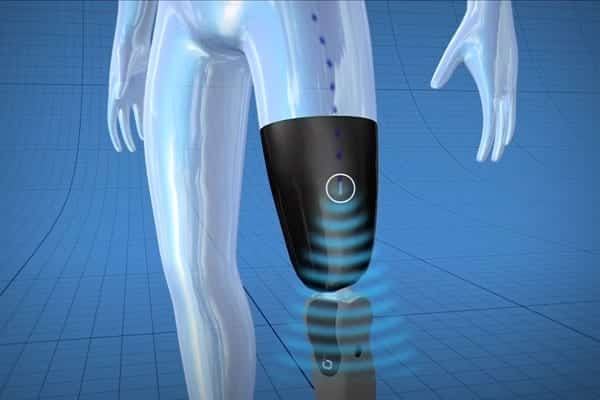 The control systems for bionic legs & feet are beginning to change. Since their commercial introduction in 1997, these systems have relied mostly on independent sensors and microprocessors without any connection to the user’s nervous system. Now, some of the same technologies utilized in upper-limb bionics — myoelectric control, enhanced surgical techniques, and sensory feedback — are working their way into lower-limb bionics.

In a system using fully autonomous control, a microprocessor automatically adjusts the prosthesis based on local sensor readings. These sensor readings typically include:

Automatic adjustments are applied to:

The goal of these automatic systems is to help users re-establish a natural walking gait:

Here is a short video showing a pair of bionic ankles being used to go up and down stairs:

And here is a bionic knee being used in a variety of challenging tasks:

It is difficult to argue with this kind of effectiveness. Fully autonomous control works but not for every scenario. One limitation is that these types of systems are entirely reactionary, i.e. they react only after the foot has made contact with the ground (Stance Phase), though some also adjust themselves during the Swing Phase. This means that you have to take that first step up or down a slope before the device can compensate. Some devices require multiple steps before adjusting.

Also, they can only handle tasks for which they have been specifically programmed, meaning they are less effective at handling situations that are new or unpredictable. For example, while most devices can handle a steady upward or downward slope, they may not fare as well with rapidly undulating terrain.

Natural systems are better at anticipating an action and adjusting to new or unusual situations. This has inspired scientists to try to incorporate some of these advantages into lower-limb control systems.

The phrase “myoelectric direct control” does not have the same meaning for lower-limb bionics as it does for their upper-limb counterparts. In upper-limb bionics, direct control means requiring users to explicitly flex specific muscles to control their bionic arm components — sort of like using muscle contractions as a joystick.

In lower-limb bionics, the phrase means that the user is in complete control of the device, including joint angles, resistance, etc., without any autonomous assistance.

There are no commercial lower-limb devices currently using this type of direct control but there are a few devices in trials, such as this one:

The challenge with this method of control is safety. For example, the ability of a knee or ankle to properly support the user’s body weight when going down stairs is crucial. If a device offers a user direct control over this factor, it must do so without error. Otherwise, the bionic joint may collapse under the user’s weight and send him tumbling down the stairs.

This is one of the reasons why researchers are exploring a hybrid model called “Myoelectric Supervisory Control”.

Myoelectric supervisory control uses a combination of direct control and autonomous capabilities. In this model, a bionic device has various modes, such as going up a slope, down a slope, up stairs, etc. When approaching this type of terrain, humans naturally adjust their joint positions and load their muscles for the required task. Myoelectric sensors can detect these anticipatory muscle movements and instruct the bionic joint to switch into the appropriate mode just as the user begins the first step on the new terrain. This eliminates the drawbacks of a purely reactionary system.

We are not aware of any of these types of systems currently on the market or in trials. This approach appears to still be in its research phase.

In the upper-limb bionic market, there is a clear delineation between sensor technologies:

Lower-limb bionics are in a greater state of flux on these issues, partly because they are in an earlier stage of development. For example, based on existing scientific papers, it looks as if lower-limb control systems may all use some form of pattern recognition by the time they make it to market.

Put another way, user-controlled lower-limb bionics may skip over some of the earlier technologies employed by their upper-limb counterparts.

Beyond the fully autonomous lower-limb systems currently on the market, we simply don’t know enough at this point to predict the technological composition of this next generation of bionic legs and feet.

Magnetomicrometry (MM) involves implanting a pair of magnetic beads into each muscle to be monitored:

When the muscle moves, the beads move with it. Magnetic sensors outside the limb track the beads. This information is passed to a control system that determines the length and speed of the muscle movement. The system then issues commands to the bionic limb to mirror this movement. This all happens so quickly that the user does not notice any delay.

The speed and precision of MM hold the promise of restoring near-natural control over bionic legs and feet. However, we don’t expect it to completely displace autonomous control on its own. Just because you can control exactly how a bionic knee/ankle/foot moves doesn’t mean that you know how it should move. That requires complete awareness of the limb’s position (known as “proprioception”), as well as some degree of sensory feedback. We cover both topics later in this article.

Even if all of these capabilities are in place, it may be that some autonomous features are retained. Automatic stumble recovery may be one such feature given how fast modern sensors and microprocessors can respond.

It should also be noted that MM is not yet ready for commercial use. It is currently in animal trials and won’t be in human trials until roughly 2024. Full commercialization is likely to take until 2027. For more information, see Magnetomicrometry (MM) for Bionic Limb Control.

Since this section is about control systems, we’ll limit our comments to the control aspects of neural interfaces.

We are not currently aware of any research, let alone devices, attempting to directly intercept motor nerve signals as the basis for user control of lower-limb bionic devices. Everything we’ve seen points to the use of myoelectric systems or, eventually, Magnetomicrometry to effect this type of control.

Neural interfaces are being used for sensory feedback.

The most obvious form of implicit control over bionic legs and feet is the socket interface between the residual limb and the device. We’re not going to cover this subject here because it deserves an entire website on its own. However, we are going to cover a socket replacement — osseointegration — plus a relatively new surgical procedure that may revolutionize key aspects of user control for all bionic limbs.

Osseointegration involves inserting a metal rod into an arm or leg bone. The bone then fuses with the rod in a manner similar to fracture healing:

Bionic devices are attached to the metal rod. This method of attachment significantly improves user control over the attached device because it makes the device a direct extension of the user’s skeletal frame. This not only increases the range of motion for the bionic limb; it also provides a form of sensory feedback through vibrations passed from the bionic device to the bone, otherwise known as osseoperception.

A more recent version of this technology — Integrum’s e-Opra Implant System — integrates embedded myoelectric sensors and a neural interface (i.e. for sensory feedback) with the implant, making it capable of supporting the most advanced user control systems on the planet:

The advantages of osseointegration include:

However, there are some disadvantages:

There are also some important prerequisites:

Each joint in the human body is controlled by a pair of muscles in an agonist-antagonist relationship. The brain uses the state of these muscle pairings to track the position of the relevant limb. For example, if you curl your lower arm toward your chest, this will contract your bicep and stretch your triceps. If you close your eyes while you’re doing this, it is the state of these muscle pairs that allows the brain to determine the lower arm’s position. As mentioned, this capability is called “proprioception”.

This allows the brain to track the missing limb as it did before. Of course, that limb is still missing, so this may not seem very useful. But if you monitor the muscle pair with sensors and then calibrate a bionic joint to mirror the muscle movements, voila, the brain can indirectly track the position of the bionic limb.

In terms of actually controlling the bionic limb, a myoelectric control system is still used — at least for now. It’s just one with a much better connection between the brain and remaining muscles in the residual limb. Also, there is less muscle atrophy when an agonist-antagonist pairing is restored, so muscle movements are stronger and therefore generate stronger myoelectric signals.

In the future, we are likely to see AMI combined with Magnetomicrometry as the ultimate control solution.

Technically, sensory feedback is not part of a bionic limb’s control system in that it does not directly trigger bionic actions. It is used to inform the user of actions that have taken place, which may then necessitate additional actions. While this may not be as important with bionic feet as it is with bionic hands, it is still highly useful, especially for helping users to adjust to rapidly changing terrain.

Currently, the following forms of sensory feedback are theoretically available, going from the least sophisticated to the most:

As previously described, this involves vibrations passing from a bionic leg or foot into the bone of a residual limb through an osseointegrated implant. This type of feedback can be surprisingly informative.

Sensors in the bionic foot pass sensory feedback to a control system, which then uses a simple feedback mechanism, such as vibrators in the prosthetic socket, to convey information to the user.

We are not aware of any commercial system that is currently using this approach for lower-limb bionics.

Instead of conveying sensor information from a bionic foot to the user via vibrators, a system can instead convey the information using TENS, which attempts to stimulate nerves with an electrical charge through the skin and intervening tissue. This can cause the brain to experience certain sensations in the missing portion of the limb that abstractly equate to sensory feedback. Note, however, that such feedback tends to be rather simplistic.

We are not aware of any system that is currently using this approach for lower-limb bionics.

TSR is a method where the skin over a target muscle is denervated, then reinnervated with nerve fibers from an amputated limb. When this piece of skin is touched, it provides the amputee with the sensation that the missing limb is being touched.

Because this approach taps into natural elements of the sensory system, numerous forms of stimulation can be used to convey sensory feedback to the user, including electrical stimulation, pressure, temperature, etc. — essentially the full range of natural sensory feedback.

We are not aware of any commercial system that is currently using this approach for lower-limb bionics.

We are describing the sensory feedback version of neural interfaces here, not interaction with motor nerves.

Electrodes are surgically implanted to wrap around or transect sensory nerves. The electrodes then stimulate the nerves with an electrical charge that tricks the brain into experiencing whatever the sensors in a bionic foot are experiencing (or some translation thereof). Here is an example:

Because this is a direct interface with the nerve, it has the most potential for communicating sophisticated information. It also has several drawbacks including the risk of infection, scarring, etc.

For more information on this type of neural interface, see Neural Interface Surgery.