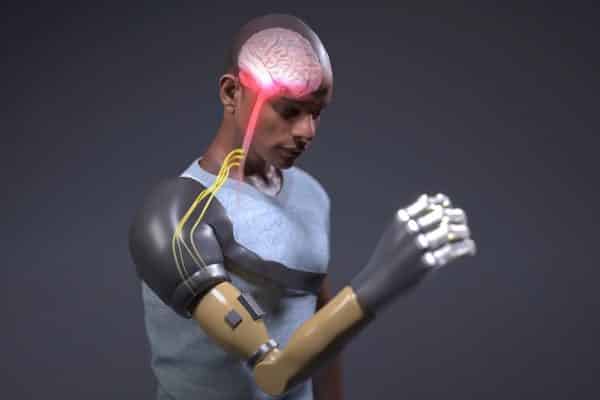 As part of our mission to help those with limb differences learn about bionic limb technology, we periodically report on the latest research news. Below are the most interesting stories that we uncovered over the past six weeks.

It is sometimes difficult to get a strong sense of direction when reviewing bionic-limb research, mainly because the research efforts are so varied. Some are working to improve the connection between the brain and a bionic hand by tapping into the central nervous system, while others are trying to build more intelligence into the hand using miniature cameras and/or artificial intelligence. Some advocate the use of surgically implanted neural interfaces, while others focus on less invasive techniques like skin sensors and electrodes.

We have no way of knowing which of these approaches will ultimately win out. But the use of neural interfaces in one form or another does seem to be gaining momentum. The latest example of this comes from the Cleveland Clinic Lerner Research Institute’s Department of Biomedical Engineering. This short video summarizes their core approach:

What excites us about this work is how holistic it is, including:

It also reminds us of the work of Dr. Dustin Tyler because it is so professional and comprehensive that one feels it is only a matter of time before it is perfected.

Our one complaint? The Lerner team hasn’t made a video showing what their solution can do in the real world. Their most recent video is a little too promotional and not sufficiently demonstrative for our liking. It is also now five years old:

By comparison, this video on Dustin Tyler’s project clearly shows some of the daily user tasks that benefit from this type of solution, starting at the 1:26 mark:

Why Are There So Few Announcements for Bionic Legs & Feet?

One of the most common complaints we get from readers is that we don’t write enough about bionic legs & feet compared to the number of articles that we write on upper-limb bionics.

This is not by choice. The simple fact is, there are 32 upper-limb bionic devices already on the market with another 10 or so pending. By comparison, there are only 18 lower-limb devices.

Even more telling, 20+ new upper-limb bionic devices will have made it to market in the five years as of the end of 2022, whereas we’ll likely only see 1 or 2 new lower-limb devices in that same period.

Part of the answer is that the barriers to entry are so much lower to start a bionic-hand company. Key components are readily available on the open market and 3D printing allows almost anyone to become a custom manufacturer. By comparison, developing lower-limb bionics tends to be a proprietary exercise from start to finish. If you really want to understand how expensive and time-consuming this is, watch this video from Shirley Labs.

Additionally, most of the new upper-limb technologies emerging from university labs over the past decade have gone on to become successful startups. New startups mean rapid innovation, intense competition, and lower prices. By comparison, all of the bionic lower-limb technologies developed by universities over the past decade have ultimately been snapped up by large prosthetic companies, with very few, if any, going on to become successful startups.

This is not to suggest that companies like Ottobock and Ossur aren’t innovating. It’s just that there’s no way that 4 large companies will ever innovate at the same pace as 20 startups.

A Key Step Forward for Osseointegration

In our main article on osseointegration, we shared a couple of risk factors brought to our attention during our video interview with Dr. Laurent Frossard. Most notable of these is the fact that up to 20% of osseointegrated implants ultimately have to be removed due to complications.

Based on responses to that article and video, we know that a lot of people who would otherwise get an osseointegrated implant in a lower limb are hesitant to do so because of the risk factors.

Thankfully, Dr. Frossard and his team have been working hard to greatly reduce the risks. We touched on this previously by pointing readers to his article, The Future of Bionic Limbs, which described a diagnostic tool that he has called a “digital twin”. Here is a brief description from that article:

“Different sensors assess the mechanical constraints applied by the bone-anchored bionics on the residuum and measure the resulting movements of the tissues (bone, muscle, tendon, fat, skin) within the residuum. The back end of the device consists of the software integrating all this information into a personalised digital twin of the residuum. Basically, the digital twin of the residuum is a virtual replica living inside the computer. It corresponds to the high-fidelity physics-based model of the different tissues constituting the residuum. The front end of the device consists of a handheld device (such as a smartphone) that provides a visual animation of the model in real time so that patients and clinicians equipped with the device and see can how movements impact the inside of the body.”

The idea is that once the digital twin of a residual limb is modeled, it can be used to make informed decisions about design, rehabilitation, and even the likelihood of failure or success, all without putting patients at risk.

Now Dr. Frossard has just won a research prize from Bionics Queensland to take this project to the next step. To see how, watch this video from 3:57 to 5:18.

This may not be as exciting as the launch of a new bionic knee or ankle/foot, but it could have a greater impact in the long run.

Are you interested in bionic limb research? If so, see our complete selection of research articles.