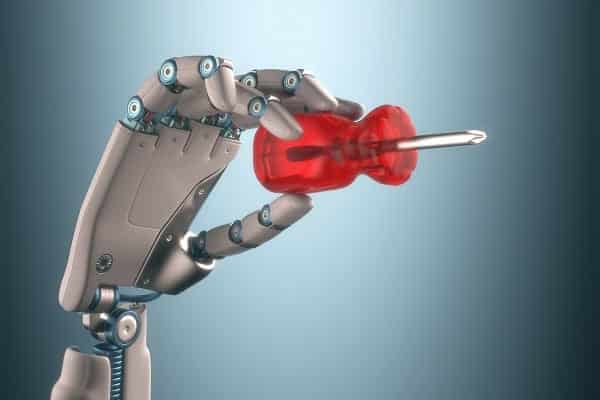 Our definition of bionic touch goes beyond the use of artificial sensors to generate information through physical contact. It also includes the brain’s awareness of body position and movement, known as “proprioception”, and the improved integration of bionic limbs with the natural body using techniques like osseointegration. We have written this article to help readers understand the distinction between these capabilities, their relationship to each other, and their role in the future of bionic limbs.

What is Bionic Touch?

We define bionic touch as a combination of sensory feedback and other forms of awareness, such as proprioception and osseoperception.

Sensory feedback is the easiest to understand because it matches the traditional definition of sense of touch. When your body comes into contact with an object, skin sensors convey significant information about that object to your brain.

Proprioception is your brain’s ability to construct a mental map of your body and to use feedback from joint muscles to track your movement in space. The best way to experience this is to close your eyes and touch your forefinger to your nose. Until the moment your finger makes contact, all of this action is guided by proprioception.

Now let’s combine these two capabilities. Imagine awakening in a dark room and reaching out to turn on a nightstand light. Your brain uses a stored 3D map of your environment for context, proprioception to steer your hand to the general area of the light switch, and sensory feedback to identify what you’re touching so that you can make the necessary adjustments.

Finally, osseointegration involves implanting a metal rod into the bone of an amputee’s residual limb to function as the connector to a prosthesis. This makes the prosthesis an extension of the user’s skeleton, which improves both control and range of motion. It also allows the user to both feel and hear the vibrations passed from the prosthesis into the bone, the same way that you can feel and hear important information when a bony part of your natural body makes contact with an object.

Amputees will never be fully satisfied with bionic limbs until they restore all of these capabilities.

One capability essential to all physical movement is proprioception. Want to be able to bound up stairs or walk on uneven terrain without visually guiding each step? You need to be aware of the position of your legs and feet at all times. Want to manipulate an object that you’re grasping without looking at it? You need to know where your fingers are and where you’re moving them to have success.

Proprioception is retained for joints that are still part of the residual limb. It is from the point of amputation onward that amputees lose this ability.

Until recently, it wasn’t possible to restore proprioception for lost joints but a new surgical technique is changing this. The core of this technique is to recreate agonist-antagonist muscle pairs in the residual limb:

The brain naturally equates the muscle pair to the missing joint. Try to move that missing joint and the muscles will respond even when the joint is not physically present. It is the sensory feedback generated by the movement of these muscles that allows the brain to track the missing joint’s position the same way that it tracks an intact joint.

Once this natural mechanism is restored, all that’s needed is to detect the myoelectric signals generated by the muscle movement, translate them into bionic limb commands to mirror this movement, and, voila, you have extended the brain’s proprioceptive sense to a bionic device.

This is a gross over-simplification but you can read the full details in our article on Agonist-Antagonist Myoneural Interface (AMI).

As mentioned, osseointegration involves inserting a metal rod into an arm or leg bone. Here is what this looks like for a lower limb when using the OPRA™ Implant System from Integrum.

A bionic arm or leg can then be attached to the abutment as shown above. When the bionic prosthesis comes into contact with something, vibrations are passed from the prosthesis into the bone through the metal implant. The resulting sensory feedback from these vibrations is called “osseoperception” and it is surprisingly informative. Uses can even tell the type of surface they are walking on through this feedback alone.

We have an entire article on Osseointegration, supported by a 4-part, in-depth interview with one of the world’s leading experts on the subject. For more information, please see Osseointegration for Bionic Limbs.

After years of neglect, there has been a recent move toward providing sensory feedback from bionic feet. The following video describes an example of this:

Unfortunately, surgically implanting electrodes to directly stimulate nerves in the leg has the following drawbacks:

Additionally, there are less invasive ways to communicate sensory feedback, such as the use of small vibrators or transcutaneous electrical nerve stimulation (TENS) inside the prosthetic socket. These are not as informative as direct nerve stimulation, so they may not be sufficient on their own. But, combined with something like AMI, they might be.

Our point in writing this section is that the calculus here is not straightforward. Each patient and his medical team must work out the best model for his particular goals and circumstances.

For more information on the technology options for sensory feedback, please see our article on Sensory Feedback for Bionic Feet.

Far more attention has been paid to obtaining sensory feedback from bionic hands than from feet. With hands, and in particular fingers, it is not enough to know where the hand is or whether it has made contact with an object. Hands perform much finer motor skills and, as such, require more detailed sensory feedback.

Providing this level of feedback is currently only possible by using implanted electrodes to directly stimulate nerves (i.e. a neural interface), complete with all the drawbacks described in the preceding section. For more information, see Advanced Neural Interfaces for Bionic Hands.

Unfortunately, neural interfaces have an additional limitation when it comes to bionic hands: a lack of precision. It is difficult to precisely stimulate a nerve with an electrode. As a result, touching an object with a bionic forefinger may be perceived as touching it with the pinky instead, which could lead to a certain amount of clumsiness. To make matters worse, recent research indicates that the brain is not capable of adjusting its sensory map to overcome such errors.

There is hope for a less invasive procedure. Researchers at the University of Pittsburgh recently discovered that existing spinal cord stimulators can be used to produce a sense of touch in missing limbs. As a simple outpatient procedure, this is far less invasive than surgically implanting electrodes, but it is also highly experimental at this stage.

To learn more about these subjects, see our article on Sensory Feedback for Bionic Hands.

If you use a bionic limb, you are eventually going to want to restore as much of your natural sense of touch as possible. But with a rapidly changing technology landscape, plotting your path forward can be tricky.

Our advice is to deal with foundational issues first. So, if you’re a good candidate for osseointegration and you’re comfortable with that solution, embrace it. If AMI becomes available for your type of amputation, explore it.

After that, you may want to test non-invasive options for sensory feedback before subjecting yourself to additional surgery. This is especially true given that we are still relatively early in the evolution of neural interfaces. It would be unfortunate to incur the high cost, risks, and discomfort of surgery only to find out that something simpler, cheaper, and less invasive had come along.