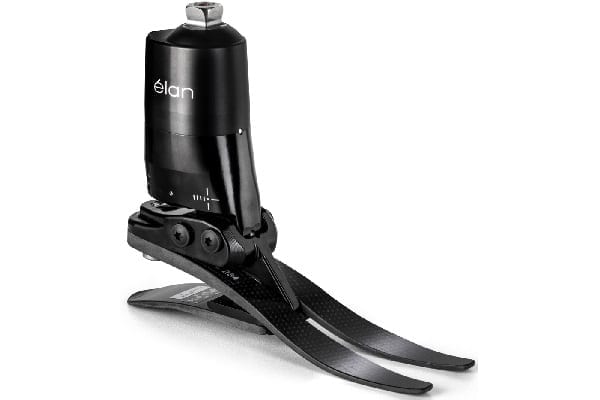 Blatchford’s Elan Foot is another worthy competitor in the microprocessor foot/ankle market. Its ability to automatically adjust both dorsiflexion and plantarflexion resistance on each step produces a smooth gait on many different types of terrain, including ramps, slopes, and stairs. The only drawbacks to the Elan Foot are that it is not waterproof and it does not allow the user to configure the foot for different shoes.

A Quick Look at the Elan Foot

The following video provides a good overview of the Elan Foot. Ignore the reference to the Endolite brand name, which is a Blatchford subsidiary.

As is the case with all microprocessor foot/ankle systems, we’re deeply impressed with this technology. It is increasingly difficult to distinguish between a natural gait and the gait of someone using this type of system.

The reported ankle ROM for the Elan Foot is only 9 degrees, which is the lowest of all microprocessor foot/ankle systems.

However, this is not the total ROM, as the foot’s flexibility is also a factor. Nor is it the full story, as the Elan Foot seems to focus more on managing dorsiflexion and plantar flexion resistance than it does on actively managing ankle rotation.

We have asked Blatchford about the differences in ROM between the different microprocessor feet/ankles, but they have not responded. This may, however, be a good point of discussion with your prosthetist about how the different foot/ankle systems adjust to various terrains.

The Elan Foot is the only microprocessor foot/ankle system to use both within-step and inter-step ankle accommodation strategies.

Within-step systems adjust the angle and resistance of the ankle to match the terrain during the stance phase of each step. Inter-step systems make their adjustments during the swing phase, i.e. between steps.

The disadvantage of using an inter-step strategy alone is that it takes several steps before the system adjusts to changing terrain.

Because the Elan Foot already uses a within-step strategy, and it already maintains dorsiflexion (i.e. it keeps the toes pointed up) during the swing phase to improve toe clearance, we’re not sure why it also uses an inter-step strategy. We submitted this question to Blatchford with multiple inquiries, but they have so far declined to answer.

The Elan Foot does not augment push-off with electric power, but it does optimize energy storage and reuse through its carbon fiber foot.

The only microprocessor foot/ankle currently on the market that enhances push-off with electric power is Ottobock’s Empower model.

Blatchford does not disclose details about the Elan Foot’s sensors and microprocessor(s).

All we know is that the Elan Foot uses a “network of sensors” to continuously monitor the user’s position and movement. We suspect that this includes accelerometer and gyroscope data, and have asked Blatchford for clarification, but, again, they have declined to respond.

We normally put significant effort into describing the benefits of a foot/ankle’s microprocessor capabilities, but, in this case, Blatchford has created some excellent diagrams of its own (source: https://www.blatchfordus.com/products/elan/):

Note Blatchford’s emphasis on the level of resistance applied to both dorsiflexion and plantar flexion in these diagrams. The ankle’s angle of rotation is mentioned only with respect to swing clearance.

As mentioned, we have asked Blatchford to clarify why this is the case, but they have declined to answer.

These technical questions aside, the broader benefits of the Elan Foot’s microprocessor system are:

In other words, not only does it improve the daily lives of users re: comfort, capabilities, and energy conservation — it also reduces long-term body wear-and-tear.

The independent data we have from August, 2018 states that the Elan Foot’s battery life is 27 hours. However, in its most recent advertising material, Blatchford states that battery life has now been extended to two days.

The Elan Foot is listed as being “water resistant”. This means that, unlike, Freedom Innovation’s Kinnex model, the Elan Foot cannot be submerged in water.

The Elan Foot is approved for outdoor use, so it is presumably dust resistant, as well. However, its official IP rating is not listed.

According to our independent data from August, 2018, the Elan Foot weighs 1200 grams. It is listed in Blatchford’s advertising material as 925 grams. The difference is likely due to the foot size being weighed.

Regardless, the Elan Foot is the second lightest microprocessor foot/ankle system after Fillauer’s Raize model.

The maximum user weight for the Elan Foot is 125 kilograms.

The Elan Foot is rated for low-to-moderate-impact K3 use. It is not intended for high-impact sports, such as running, basketball, etc.

We are unable to find end-user software for the Elan Foot, though there is a software interface for clinicians to configure the foot.

Consequently, it appears that users are unable to create different settings for different shoes or to exert any personal control over ankle stiffness settings. This suggests that the Elan can only be configured for one heel height, and that users must visit their prosthetist’s office to change this. We have asked Blatchford to verify this point, but they have again declined to respond.

The Elan Foot offers a three-year manufacturer warranty, matching that of Ottobock’s Empower and Freedom Innovation’s Kinnex models. All other microprocessor ankles come with a two-year warranty.

According to our information from individual users, the Elan foot sells for between $18,000 to $20,000 US inclusive of all prosthetist fees.

To see how the price of the Elan compares to its competitors, please see our Bionic Foot Price List.

Considerations Before Buying an Elan Foot

Based on watching videos of Elan Foot users maintaining an incredibly smooth gait over many different types of terrain, we urge all users shopping for a microprocessor foot/ankle system to at least test this device.

This is not just a matter of our opinion. Blatchford has done a superb job of cataloging the benefits of the Elan Foot in this white paper: A Study of Hydraulic Ankles, which includes a section on microprocessor control.

They have also put together this Clinical Studies Compendium for scientific studies related to hydraulic foot/ankle systems, again including information on both microprocessor systems in general, and on the Elan Foot in particular. One cannot ask for much more in terms of scientific transparency.

That having been said, the Elan Foot’s lack of user software and in its inability to support user settings for different shoes are drawbacks. This is also true of the Elan Foot’s limited “water resistant” classification compared to foot/ankle systems like Freedom Innovation’s Kinnex, which is fully submersed in water for up to 30 minutes.

Another drawback is Blatchford’s refusal to respond to any of our questions despite having multiple instances of contact with them. We don’t understand what is behind such petty secrecy. Amputees and others with lower limb differences should be able to research potential solutions on their own, just like any other consumer. To deny them access to basic information is to disrespect them.