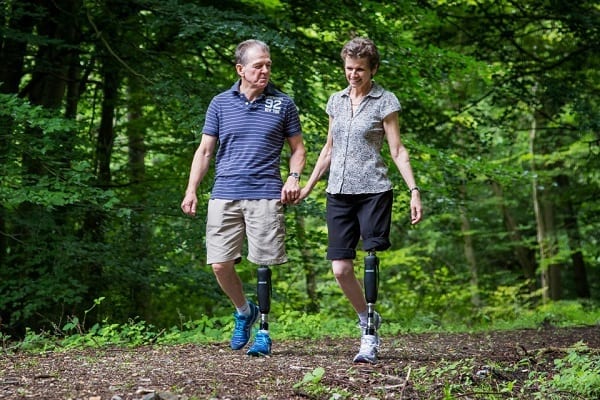 As with all of Blatchford’s recent bionic limb updates, the closer you examine the Orion Knee, the more impressive it becomes.

A Quick Look at the Orion Knee

The following video provides a good technical overview of the Orion:

The Orion Knee handles the Stance Phase much like the other leading knees in the same price category, namely Ottobock’s C-Leg and Ossur’s Rheo. In brief, sensors help maintain situational awareness of:

The Orion’s microprocessor then adjusts the knee’s hydraulic resistance to match the situation. For example, when descending stairs or slopes, the Orion progressively increases resistance to provide better support and control.

The Orion’s stumble recovery feature is also similar to that of other bionic knees. When its microprocessor detects a stumble, the Orion immediately increases the knee’s resistance to aid in recovery and prevent a fall, as demonstrated in this short video:

In the Swing Phase, the Orion uses microprocessor-controlled pneumatics to:

This use of pneumatics is similar to how Plie Knee handles the Swing Phase except that the Orion does not periodically require the user to manually adjust the pneumatic air pressure.

In addition to these core technologies, the Orion also provides specific support for:

Benefits and Drawbacks of the Orion Knee’s Design

There was a time when the Orion Knee’s technology was considered inferior to that of the C-Leg, Rheo, and even the Plie. This has not been the case since the launch of the Orion 3 in September 2016. The intended core behavior of most non-premium bionic knees is now quite similar. The differences have more to do with performance and, as always, compatibility with individual users.

There is little to differentiate the performance of non-premium bionic knees. In a June 2020 study titled “Retrospective Analysis of Four Different Microprocessor Knee Types”1, researchers compared the experiences of 602 users of the C-Leg, Rheo, Orion, and Plie bionic knees across the following key measures:

Put another way, the Orion and the C-Leg seemed to have a slight advantage over the other knees in a couple of categories but the differences were not significant.

This study is especially important because a) it is quite recent, and b) it is the only study that we could find directly comparing leading bionic knees that wasn’t funded by one of the knee manufacturers.

The Orion Knee is compatible with Blatchford’s Elan bionic foot, as well as many of Blatchford’s mechanical feet including:

Blatchford recommends using only Blatchford feet with the Orion as they have been designed to give customers optimal performance. If the Orion is combined with another manufacturer’s foot, it is the customer’s responsibility to validate this combination. However, unlike some of the other bionic knees on the market, Orion’s warranty is not invalidated by the use of another manufacturer’s foot.

The Orion Knee’s battery can last for up to three days depending on the level of activity.

If completely drained, the battery requires up to eight hours to fully charge.

As with most bionic limbs, it is best to charge the Orion’s battery each night.

The Orion Knee is described as “weatherproof”, meaning it can be worn in the rain or splashed with freshwater but it cannot be submerged.

The knee is considered dustproof.

However, there is no official IP rating for the knee, so it is probably best to clarify any restrictions with your prosthetist.

The Orion Knee weighs 1.5 kilograms. The maximum allowable user weight for the knee is 125 kilograms.

The Orion is recommended primarily for K3 use, though it may also be suitable for high K2 or low K4 users whose main focus is improved stability while walking.

The Orion Knee does not offer user software. It does, however, offer configuration software for prosthetists.

User-controlled settings, such as switching to the cycling mode, are activated by pushing a button on the device.

Blatchford offers a three-year warranty on the Orion Knee including any repair costs due to defects. For this warranty to remain in effect, the knee must be serviced 20 months after purchase.

Users can also pay to extend the warranty to six years. For the warranty to remain valid under this option, the knee must additionally be serviced at 40 and 60 months after purchase.

For repairs or service inspections, Blatchford provides a loaner knee upon request. The loaner is free for the first 45 days. Rental fees apply after 45 days.

According to our information, the Orion Knee typically sells for between $30,000 and $40,000 US including the socket, prosthetic foot, and all prosthetist fees.

Are you or have you previously been an Orion Knee customer? If so, please share your insights with others looking at the Orion Knee as a possible prosthesis.

We do not yet have a sufficient number of survey participants to publish fair and accurate results for the Orion Knee.

Considerations Before Buying an Orion Knee

In our opinion, there is little reason to choose one non-premium bionic knee over another based on technology alone. Therefore, the Orion Knee, which is typically less expensive than either the C-Leg or the Rheo due to aggressive price discounts, certainly warrants consideration for prospective K3 users.

One question you will want to explore with your prosthetist is whether Blatchford has established an adequate support network in your local area. There were some concerns about this in the U.S. before 2017. The company has since moved to address the issue, but it wouldn’t hurt to verify that you have multiple options for support in your geographical region before making a purchase.