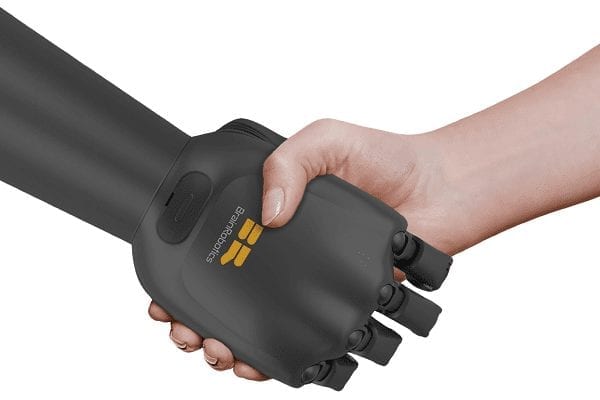 If you had an upper limb difference in the year 2000, your best prosthetic option might be a body-powered hook or claw. By 2010, you could use a bionic hand to control a number of preset motorized actions via myoelectric signals. Now, in 2020, the Dexus Prosthetic Hand will let you control the movement of individual fingers entirely by thought.

A Quick Look at The Dexus Prosthetic Hand

BrainCo, the maker of the Dexus Prosthetic Hand, is an interesting company. They specialize in detecting and interpreting brain signals in real time, which they use to enhance relaxation, engagement, and learning.

It is only natural, then, that when they decided to build a bionic hand, they applied similar skills to create one of the world’s most advanced myoeletric control systems. Users of the Dexus Prosthetic Hand can manipulate their bionic fingers via direct control, much the same as they would natural ones:

This is the ultimate level of myoelectric control. For those with upper limb differences, it offers the chance to recover abilities they likely thought they had lost forever. With the right training, even dexterous tasks like typing on a keyboard or playing a piano may soon be possible.

We absolutely applaud such an incredible advancement!

Most modern bionic hands use sensors placed against the skin of the residual limb to detect two types of muscle movement: one intended to close hand, the other to open it.

Bionic hands that use this two-signal system must be programmed in advance with preset grip patterns, such as a fist or pinch, etc. When the user is in fist mode and triggers a close action, the bionic hand closes like a fist. When in pinch mode, only the thumb and the forefinger close, which allows the user to pick up smaller objects. It is the user’s responsibility to select the appropriate grip pattern, typically by using a double open signal to rotate through all available patterns.

More sophisticated control systems employ a technology called Coapt Pattern Recognition. This technology uses more sensors to map patterns of muscle movements to specific grip patterns. The grip patterns themselves still have to pre-programmed, but switching between them becomes automatic and intuitive.

It then uses artificial intelligence (AI) to identify the patterns associated with even more specific movements, such as controlling individual fingers.

Users can still use pre-programmed grip patterns if they want, but they can also simply make up grips on the fly, the same way people do when using natural hands.

Surprisingly, despite its more sophisticated level of control, the Dexus Prosthetic Hand is not difficult to train.

A new user can achieve basic control of the hand in about 15 minutes. More nuanced movements and specific grip patterns, if desired, require a little longer.

As with most AI technology, the more data it has, the more it learns.

The Dexus Prosthetic Hand’s thumb can be directly controlled in the same manner as its fingers. Where pre-programmed grip patterns are used, the thumb will position itself automatically.

We do not yet have any details on the proportional speed control system, but it appears to be similar to that of other myoelectric hands. However, there has been no indication of grip augmentation features such as the automatic finger stalling, Vari-Grip, or Auto-Grasp features offered by Ottobock’s i-Limb.

We do not yet have any data on lift capacity or grip strength.

We do not yet have any information on durability. As the Dexus Prosthetic Hand is not scheduled for FDA approval until the end of 2020, we may not have any reliable durability data until 2022 or even 2023.

We do not yet have an official price for the Dexus Prosthetic Hand. However, BrainCo has made a point of saying that they are targeting the lower end of the price range for the bionic hand market.

If this turns out to be the case, it will fundamentally improve the pricing landscape of below-the-elbow bionic arms — welcome news to the millions of people around the world who need these devices!