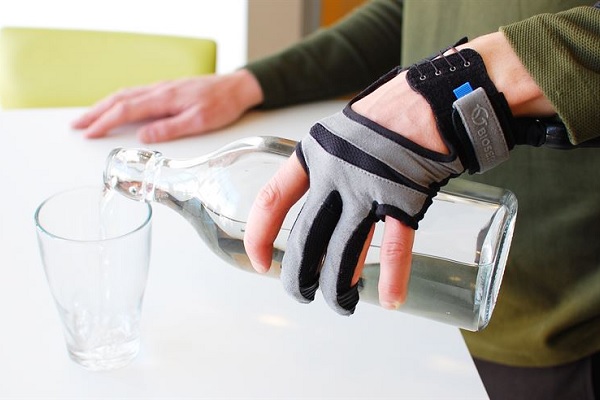 The Carbonhand is a soft, assistive robotic glove that uses powered artificial tendons to augment the grip of people with insufficient strength in their hands.

A Quick Look at the Carbonhand

The Carbonhand is for users who can move their hands but lack the strength to perform some daily activities. It uses powered artificial tendons to augment the gripping power of the thumb, middle finger, and/or ring finger, depending on its configuration. Perhaps most impressively, it uses pressure sensors in those three digits to intelligently respond to user actions, making the glove’s use highly intuitive.

Unfortunately, we don’t have a very good instructive video for the current version of the Carbonhand. The best we can do is this 2015 video of its predecessor, the SEM Glove. The Carbonhand has evolved since then, particularly in its control system and also with the introduction of a mobile app for configuration. But the core design remains the same:

Speaking of this design, here is a diagram of the Carbonhand’s main components, which we have copied from its User Manual:

Finally, the Carbonhand 2.0 is in pre-launch. We’ll update this article as soon as we have more information about this new version.

The Carbonhand has a sophisticated control system. It relies on pressure sensors in the tips of the glove’s thumb and two fingers. When the user attempts to grasp an object, the sensors detect the increased pressure and respond with proportional augmentation, i.e. if the user tries to grab an object with maximum force, the glove will respond with the maximum augmentation set in the configuration. Less user force results in less augmentation.

The beauty of this system is that it can be calibrated to the user’s individual needs. If a hand is extremely weak, its grip force may be substantially less than that of a stronger hand, yet the Carbonhand can still respond with its full range of augmentation thanks to personalized calibration.

This calibration applies to activation (the force needed to activate the Carbonhand), the sensitivity of the sensors, and the maximum allowable force. Maximum force and sensor sensitivity can be set universally or for each digit. This accommodates a situation where, say, a person’s thumb is substantially weaker than the middle and/or ring fingers.

If one of the digits is particularly weak and can’t generate enough pressure to activate the Carbonhand tendons, that digit can be paired with another digit. This allows the user to set up the Carbonhand so that, say, activating the middle finger can also activate the thumb.

All of these settings can be configured by the user via a mobile app. In addition to the default configuration, users can create up to three custom configurations and then quickly switch between these configurations using buttons on the control unit. This addresses scenarios where the user is performing different types of tasks, or perhaps if the user’s hand tires and needs additional responsiveness/augmentation.

To release the Carbonhand’s grip, the user simply has to relax his natural grip.

All in all, a very intuitive and impressive control system!

The Carbonhand does support proportional force. The harder the user grips an object with his natural hand, the more the Carbonhand will augment the user’s grip, keeping in mind that the glove’s maximum augmentation is 20 newtons (roughly the force needed to hold 2 kilograms).

The Carbonhand does not provide any sensory feedback to the user. However, the user continues to receive sensory feedback from his natural hand, especially its uncovered forefinger and pinky.

A future version of the Carbonhand will collect pressure sensor and usage data, which it will make available to healthcare providers as part of the glove’s role in rehabilitation. See Considerations Before Buying for more information on the rehabilitative aspects of the Carbonhand.

The Carbonhand is available in six different sizes for both left and right hands: XS, S, M, L, XL, XLW. The Carbonhand control unit, upper arm strap, and lower arm strap also come in multiple sizes. It is clear from this approach that proper sizing should not be an issue.

The glove portion of the Carbonhand weighs 85 grams. The control unit weighs 600 grams. Because the control unit is attached to the upper arm (or the hip or to a wheelchair, etc.), weight should not be an issue.

The Carbonhand can augment the user’s grip force by up to 20 Newtons of force. This consists of 8 Newtons for the thumb and 5 for each of the two augmented fingers.

By comparison, the average maximum grip force for women is 292 Newtons, and, for men, 517 Newtons. The average grip force used in daily activities is 70 Newtons.

Given this information, the Carbonhand is clearly not intended for heavy work. But it is suitable for tasks like eating, drinking, brushing one’s teeth, opening doors, etc.

We do not have an official lift capacity for the Carbonhand. However, 20 Newtons of added force roughly equates to 2 kilograms.

Having said this, we rely mainly on feedback from our own User Satisfaction Survey as our main measure of durability. However, as this device is new to us (and therefore to our audience) it may be a year or two before we have sufficient feedback to publish this information.

If you have to use the Carbonhand in a wet or dusty environment, note that you can wear a second glove over the Carbonhand’s glove.

The company that makes the Carbonhand, Bioservo, does not appear to sell any protective gloves for the Carbonhand. However, it can be used in combination with typical retail gloves.

The batteries for the Carbonhand are designed to last approximately 8 hours depending on usage.

The system comes with a battery charger. We do not have any information on how long it takes to charge the batteries once they are fully drained, but most users will adopt a cycle of using the Carbonhand during the day and recharging it at night.

It allows users to define multiple personal profiles and to assign one profile to each other three profile buttons on the control unit.

What is a profile? It consists of four groups of settings displayed in this image of the app, again copied from the Carbonhand’s User Manual:

As mentioned in the Grip Patterns and Control System section, these settings include:

The Carbonhand currently sells for about $7,000 US. Additional glove components, which must be replaced every six months or so, depending on their use, sell for about $550 US.

For a complete list of prices for other assistive robotic gloves, please see our Assistive Robotic Glove Price List.

The Carbonhand is currently available in Sweden, Norway, Belgium, Germany, Italy, and Japan.

The Carbonhand comes with a 2-year warranty for everything except the glove and battery components.

The glove and battery components each have 6-month warranties.

Are you currently using the Carbonhand or have you used it in the past?

We do not yet have a sufficient number of survey participants to publish fair and accurate results for the Carbonhand.

Considerations Before Buying a Carbonhand

The first observation that we’d like to make about the Carbonhand is that its maker, Bioservo, is serious about assistive gloves. It helped create the industry and has been involved in groundbreaking research, field trials, and production of these devices since 2006. Additionally, it now makes an industrial assistive robotic glove that shares a lot of its technology with the Carbonhand.

Why is this important? Because Bioservo is getting feedback and gaining experience with almost every conceivable use of assistive gloves. Its new release of the 2.0 version of these gloves, along with its increased data capture and analysis of glove usage, point to a future of continued evolution and improvement, which is exactly what this company has demonstrated since its first prototype.

We’d also like to point out that the Carbonhand is proving very effective for rehabilitation. We’ll be elaborating on this topic in a separate article on the rehabilitative effect of assistive robotic gloves, but recent test data with the Carbonhand reveals the following positive impacts:

Combined with the ability of users (or their doctors) to adjust the Carbonhand’s calibration, this device may in fact help create a pathway to maximize rehabilitation while at the same time improving the user’s daily quality of life. This is no small achievement.

Is the Carbohand the best device in its class? We don’t know. For the first time, it seems to have significant competition from a startup called Nuada. But as we are merely observers of these technologies, we’ll let real users tell us which glove is better as they fill out our User Satisfaction Survey.

In the meantime, we think that those suffering from hand weaknesses should have an extremely positive view of the future, as it appears that companies such as Bioservo and Nuada are well on their way to resolving the disability aspects of having a weak grip.

For a list of competitor devices, see current options for assistive robotic gloves.

For a comprehensive description of all assistive robotic glove technologies, devices, and research, see our complete guide.