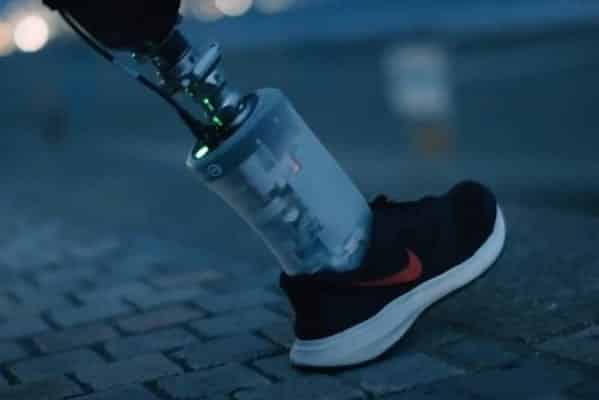 Unfortunately, all those devices are made by only five companies — a situation that slows innovation and stifles price competition.

Dissatisfied, we did a worldwide sweep and managed to find five new devices that push the existing boundaries in some way.

Unfortunately, Ossur bought this technology in late 2019, meaning it’s going to add to the existing monopoly on microprocessor ankles/feet. Still, it appears as if commercialization is not too far off, so we’ll continue to monitor the situation and report on any developments as soon as they occur.

BionicM is a Japanese company that lists two lower-limb bionic devices on its website: the Powered Knee Joint and Powered Foot, both still in the prototype phase.

Regardless, BionicM is a true breath of fresh air in the lower-limb bionics market. We don’t yet have a timeline for their official launch dates or their pricing, but we’ll write detailed articles on both devices as soon as more information becomes available.

A Bionic Ankle/Foot from Axiles Bionics

Axiles Bionics is a spin-off from Brubotics (Vrije Universiteit Brussel, Belgium) that specializes in robotics, artificial intelligence, and human biomechanics. They strive to improve quality of life with assistive robotics, and their first focus is with below-the-knee amputees by bringing the next-generation bionic feet to the market.

With 15 years of academic research, both in robotics and artificial intelligence, Axiles Bionics started working on the development of their first bionic foot product in 2019, which is expected to be launched in the coming years. According to dr. ir. Pierre Cherelle (Founder CEO of Axiles Bionics), they’re developing a technology with unmatched human-like capabilities that will adapt to the user over time. Simultaneously, they aim to make it affordable so that everyone can benefit from their technological advances.

We had a great meeting with Mr. Cherelle and learned many new things about the natural human gait and the opportunities for bionic ankles/feet to restore that gait. We will write an in-depth article on this new device as soon as Axiles is ready.

This knee is a recent addition to the microprocessor knee market (2019) but it is not actually made by DAW, which is an American company. It comes from a Taiwanese company by the name of Teh Lin Pros. & Ortho. Inc.

We did not detect this knee in our original research because, while DAW does market directly to clinics, it does not appear to put much effort into marketing to the general public. For example, it only created its YouTube channel in late 2019 and has since amassed a grand total of 13 subscribers. Its videos lack marketing polish, and it doesn’t appear to have any notable social media presence. Frankly, it is almost as if the company is intentionally trying to fly below the consumer radar.

However, we have become quite interested in this microprocessor knee for the following reasons:

Therefore, we have decided to write a more detailed article on this knee in the coming weeks, and also to add it to our lists and all other relevant articles.

Microprocessor Knees That We’ve Decided to NOT Cover

For a comprehensive description of all current upper-limb technologies, devices, and research, see A Complete Guide to Bionic Legs & Feet.