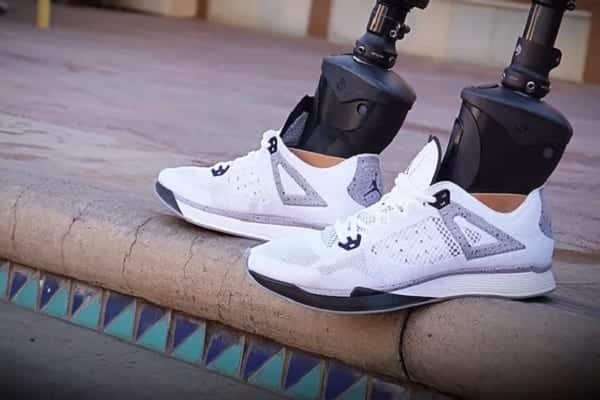 Proteor USA’s Freedom Kinnex is one of the most advanced bionic foot/ankle devices on the market. Rated as an IP67 device, it is both dust resistant and fully submersible in water.

A Quick Look at the Kinnex

We prefer using third-party user videos to demonstrate the real-life functions of bionic devices. However, these two video commercials provide excellent footage of the Kinnex handling ramps, hills, and stairs:

For those of us looking forward to the day when technology eliminates all disabilities, the ease with which Kinnex handles these tasks is encouraging.

Kinnex uses a within-step ankle accommodation strategy. This means that the ankle adapts to the terrain during the Stance Phase of each step. The alternative strategy is to adapt during the Swing Phase, but this requires multiple steps to adjust to changing slopes.

Kinnex does not provide any electric power to the foot/ankle to assist with push-off, but it does optimize energy storage and reuse through its carbon fiber foot plate.

The only bionic foot/ankle currently on the market that provides electric power to assist with push-off is Ottobock’s Empower model.

All of this sensor and inertial measurement data is fed into the unit’s microprocessor to automatically adjust the foot/ankle position according to the terrain, as well as to adjust ankle stiffness based on walking speed and step cadence.

Kinnex also accommodates varying heel heights up to two inches and allows users to program settings for up to 100 different shoes.

On even ground, Kinnex automatically adjusts the ankle’s dorsiflexion, plantar flexion, and ankle stiffness to mimic the motion of a natural foot/ankle. This provides superior shock absorption, which leads to a fluid forward motion and greatly reduces the stress on the prosthetic socket. The automatic adjustment of ankle stiffness also allows users to comfortably adjust their walking speed without disrupting their gait symmetry.

On ramps and steps, users of fixed ankle devices are forced to adjust their posture and motion because the prosthetic foot will not adjust. This increases the stress on the prosthetic socket as well as the load placed on the knee and hip of the intact limb, if present. Again, Kinnex automatically adjusts to eliminate the need for this unnatural compensation.

As shown in this next video, the ability to automatically adjust the angle of the foot/ankle makes sitting far more comfortable. It also makes it possible to place the prosthesis more directly under the center of gravity when getting up. Absent this ability, the user would have to shift most of the load onto the intact limb, if present.

Kinnex has a battery life of 24 hours. This is on the low end for bionic ankles but clearly sufficient for daily use.

Kinnex is rated as an IP67 device, meaning that you can submerge it in water for up to 30 minutes. It is also highly dust resistant.

In theory, lighter prostheses require less energy. However, this can be offset by how a device assists the user in other ways. For example, a fixed ankle system may be quite light but its failure to adjust the foot/ankle position for ramps or stairs will cause the user to exert more energy to compensate.

Kinnex comes with a user application called the Kinnex App, which is available for download from either the Apple App Store (IOS device) or the Google Play Store (Android).

With the release of Proteor’s Freedom Quattro bionic knee, we noticed that its mobile app, called the “Freedom Innovations App”, can also be used to manage the Kinnex, so it may be that Proteor is moving toward a universal app for its Freedom line of bionic devices. We’ll update this section as soon as we know more.

The Kinnex comes with a three-year manufacturer warranty. This is the same as the warranty for Ottobock’s Empower and Blatchford’s Elan models. All other bionic ankles come with a two-year warranty.

We do not have any information on the compatibility of the Kinnex with specific bionic knees. Unlike other manufacturers, who almost always limit the compatibility of bionic knees and ankle/feet to their own line of products, Freedom Innovations did not enforce this rule in the warranty terms of at least some of its products, such as the Plie Knee. And it does not appear to us as if Kinnex’s new owner, Proteor USA, has changed any of the warranty terms as of October 2021.

Are you or have you previously been a Kinnex user? If so, please share your insights with others looking at the Kinnex as a possible prosthesis.

We do not yet have a sufficient number of survey participants to publish fair and accurate results for the Kinnex.

Considerations Before Buying a Kinnex Foot/Ankle

We’re happy to report that those concerns have been addressed, as Proteor has made significant progress in improving its sales & support network, including its recent additions of:

For more information on the Kinnex please see this dedicated website.