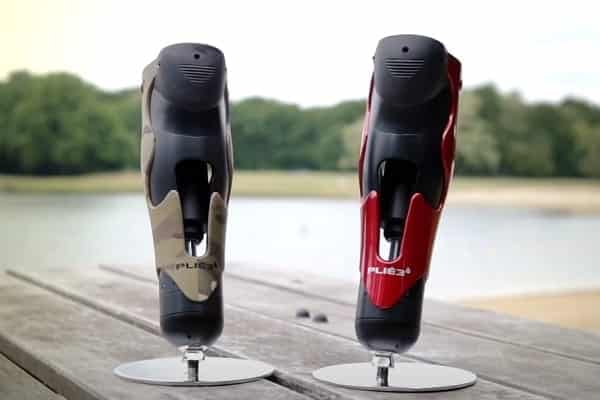 The Plie Knee has some unique features that draw both supporters and detractors. With its acquisition by Proteor USA now complete, we are waiting for some indication of its future.

A Quick Look at the Plie Knee

The following video is promotional but contains some good footage of the Plie Knee in action:

Unfortunately, this is one of the few videos that we have been able to find on the knee’s latest version, the Plie Knee 3, despite it being on the market since 2014.

This lack of media attention, the fact that the Plie Knee has not received a major update since 2014, and the recent acquisition by Proteor USA all raise questions about the Plie’s future — a point we address in more detail near the bottom of this article.

The Plie Knee addresses some of these tasks in a way that differs from many of the other bionic knees on the market.

To start with, resistance for stance flexion is controlled in the Plie based on values that are set manually by the user:

The Plie’s microprocessor determines when to shift from Stance Phase to Swing Phase and when to activate Stance mode to recover from stumbles, but it does not actively adjust the degree of resistance throughout the Stance Phase. Other leading bionic knees do actively manage this resistance.

The Plie Knee also uses pneumatics to assist in managing the Swing Phase. Specifically, it uses an air bladder to limit heel rise in slow walking and also to help provide swing extension at all walking speeds. The microprocessor still controls the maximum heel rise based on values set in the setup software, but the degree of swing extension is determined by the amount of air pressure in the air bladder.

Benefits and Drawbacks of the Plie Knee’s Design

Because the Plie Knee relies on manual settings to control stance flexion, swing flexion, and swing extension versus microprocessor management of these elements in other leading bionics knees, there has been some debate as to whether the Plie Knee is truly a microprocessor knee. This debate has been fueled in large part by marketing teams from key competitors.

However, we think this difference is not as great as some of these competitors claim. In a June 2020 study titled “Retrospective Analysis of Four Different Microprocessor Knee Types”1, researchers compared the experiences of 602 users of the Rheo, C-Leg, Orion, and Plie bionic knees across the following key measures:

Put another way, the Plie Knee tended to score lower on most tests than the other bionic knees but the differences were slight.

This study is especially important because a) it is quite recent, and b) it is the only study that we could find directly comparing leading bionic knees that hadn’t been funded by one of the knee manufacturers.

One practical drawback of the Plie’s design is that users sometimes have to manually adjust the air pressure in the knee’s air bladder. A small pump is required to increase the air pressure.

The Plie Knee is compatible with a wide variety of commercial prosthetic feet. Unlike with many bionic knees, using a foot made by someone other than the knee manufacturer does not invalidate the Plie’s warranty.

The Plie Knee’s battery can last for up to 24 hours depending on the level of activity.

As with most bionic limbs, it is best to charge the Plie’s battery each night.

The Plie Knee has an IP rating of 67, meaning that it can be fully submerged in fresh water to a depth of 1 meter for up to 30 minutes. However, it should not be immersed in salt water or chlorinated water, as this may cause corrosion.

The knee is considered dustproof.

The Plie Knee weighs 1.23 kilograms. The maximum allowable user weight for the knee is 125 kilograms.

The Plie Knee is rated for K3 use. It is best suited for low-to-mid K3 amputees who need customized stumble recovery or high K3 (or even low K4) users who want a knee that adjusts to both walking and running.

The Plie Knee does not offer user software, as all user settings are configured manually. It does, however, offer software for prosthetists to set up the Plie.

Proteor USA offers a full three-year warranty on the Plie Knee including any repair costs due to defects. For this warranty to remain in effect, the knee must be serviced 12 and 24 months after purchase.

Users can also pay to extend the warranty to five years. For the warranty to remain valid during this extension, the knee must additionally be serviced 36 and 48 months after purchase.

According to our information, the Plie Knee typically sells for between $30,000 and $40,000 US including the socket, prosthetic foot, and all prosthetist fees.

The following comments are from clinicians with extensive experience with the Plie Knee:

Are you or have you previously been a Plie Knee customer? If so, please share your insights with others looking at the Plie Knee as a possible prosthesis.

We do not yet have a sufficient number of survey participants to publish fair and accurate results for the Plie Knee.

Considerations Before Buying a Plie Knee

Unlike some of the material you will encounter online, especially scientific studies financed by its competitors, there is no proof that the Plie Knee is notably inferior to other leading bionic knees in terms of its technology. As shown by the neutral study we referred to earlier in this article, we believe that it is only slightly inferior. And whether this slight disadvantage will affect an individual user very much depends on that user’s specific needs and circumstances.

Offsetting this slight technical disadvantage, the Plie Knee has traditionally sold at a discount to bionic knees such as the C-Leg 4 and the Rheo. This created a good enough value proposition that the Plie was able to put pricing pressure on those competitors.

Another early advantage of the Plie Knee was that it was waterproof, whereas the current version of the Rheo and earlier versions of the C-Leg were not. However, when the C-Leg 4 came out with the same waterproof and dustproof ratings as the Plie Knee in 2015, the Plie lost this advantage.

Finally, another factor to consider with the Plie Knee is future support. Ottobock reached an agreement to purchase Freedom Innovations in September 2017. However, the U.S. Federal Trade Commission (FTC) blocked the sale to prevent Ottobock from dominating the bionic knee market.

To satisfy the FTC, Ottobock reached an agreement to sell a significant portion of Freedom Innovations’ lower-limb prosthetics to Proteor USA, including the Plie Knee. That transaction has now been completed.

We have described all of this because we believe that it is currently the biggest consideration as to whether to buy a Plie Knee at this time. Will the Plie Knee continue to be supported by Proteor USA in its current form? We think this is likely. Will it undergo a significant redesign in the future? This is unknown. As such, we think it’s prudent for prospective users to wait until Proteor USA has declared its plans for the Plie Knee before making a purchase.