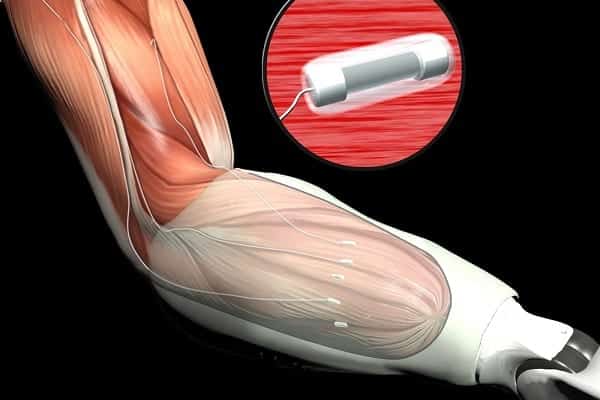 Implantable myoelectric sensors eliminate many of the drawbacks of skin-surface sensors. The question is, are they worth invasive surgery?

The Need for Better Myoelectric Sensors

Most myoelectric sensors currently used to control bionic limbs are built into the prosthetic socket so that they press against the skin where they can detect the movement of certain muscles.

The problem with this approach is that residual limbs often change size and shape throughout the day, causing the sensors to shift position relative to their target muscles. Different arm positions can have the same effect, while excessive sweat or dry skin can interfere with myoelectric signals.

Pattern recognition systems are one possible solution to this problem. They use more sensors, resulting in more data, and also allow for quick recalibrations to match changing circumstances. But even they are affected by many of the same skin/sensor contact issues.

One solution to this problem is to surgically implant the sensors directly into the muscles, thereby eliminating the skin from the equation altogether.

As far as we can tell, the first serious work on implantable myoelectric sensors began in 2003.

The concept was simple but the implementation was not. Suitable sensors needed to be designed. They needed to be powered wirelessly and to transmit their data the same way. And a new control system had to be developed to process data received simultaneously from many more sensors and at different depths of the muscle tissue.

The control system is particularly important. To grasp an object with a bionic arm/hand using just two myoelectric sensors on the skin’s surface, an above-the-elbow amputee might have to perform the following tasks:

To make matters worse, the user has to repeat the same specific muscle contractions to perform each task, which can be tiring.

The ability to read data from many more myoelectric sensors and to detect deeper muscle signals makes it possible to identify and interpret each of these intended movements simultaneously. This means that the user can simply attempt to move his bionic arm as he would a natural arm and let the control system figure out how to make it all happen.

That is not only a huge time-saver for the user but also much less exhausting!

This was not a short trial. It lasted three years. To get a sense of where it ended up, check out this video from 2:15 onward:

Shortly after the preceding trial began, Ossur announced that they had successfully used IMES in a lower-leg experiment with two amputees wearing a Proprio Foot.

Later, in 2019, they created the following video showing the same concept expanded to include a bionic knee:

Unfortunately, in November 2019, the Alfred Mann Foundation sold or licensed the IMES technology to Ossur. This is unfortunate because it means that we have likely lost the ability to track IMES as a separate technology and we’ll have to monitor its evolution via Ossur products instead.

IMES is not the only use of implantable myoelectric sensors. We’ve also seen them show up as part of various projects involving Targeted Muscle Reinnervation (TMR). They’re also part of Integrum’s e-Opra Implant System, which combines osseointegration with an integrated neural interface and the embedded myoelectric sensors:

Before you start cutting open your muscles in search of better prosthetic control, we thought it wise to make you aware of a few alternatives.

Mechanomyogram (MMG) sensors monitor the mechanical signals generated by a muscle when it contracts instead of the electrical signals detected by myoelectric (EMG) sensors.

To our knowledge, this technology is only used for the control system of one commercial bionic limb: the Grippy Bionic Hand. But here is what the CEO of Grippy’s manufacturer, Robo Bionics, had to say about his reasons for using MMG sensors:

“We wanted Grippy to be used equally by someone who doesn’t have a hand due to traumatic loss as well as someone without their hand from birth (congenital). In the case of the congenital cases, they were not able to achieve fine control of muscles as they had never learned it. The same issue was also faced by people who underwent traumatic amputations and were using body-powered, cosmetic, or no prosthesis for over 5 years after amputation. EMG for all these cases needed extensive training time and during the training sessions, the misfiring of the sensors would also demotivate the users. EMG readings were also affected due to humidity and heat which caused a lot of sweating in most places in India. We mitigated all those problems with the use of MMG and it brought our training period down to 15 to 20 minutes, even in trials with above elbow amputation cases.”

Based on our follow-up research, we did not find anything to contradict Mr. D’sa’s claims. So why isn’t MMG used in place of EMG for more devices? It appears as if research on EMG simply advanced more quickly than for MMG, at least for prosthetic control. Thus, there may be more competition between these technologies in the years ahead.

In any event, this is one technology worth monitoring.

Magnetomicrometry (MM) involves implanting a pair of magnetic beads into each muscle to be monitored using a less invasive method than surgery (i.e. possibly injection).

When the muscle moves, the beads move with it. Magnetic sensors outside the limb track the beads. This information is passed to a control system that determines the length and speed of the muscle movement. The system then issues commands to the bionic limb to mirror this movement. This all happens so quickly that the user does not notice any delay.

The speed and precision of Magnetomicrometry promise a much greater level of control over bionic limbs than anything we’ve seen to date. For bionic hands, it may even provide precise, intuitive control over individual fingers.

Its current disadvantage is that it’s still a few years away from human trials and likely five years away from commercialization. It’s also best paired with a surgical procedure called Agonist-antagonist Myoneural Interface (AMI), which isn’t exactly ideal if your goal is to avoid surgery.

While the current versions of skin sensors still have many flaws, there is a lot of research on improving these sensors and the pattern recognition systems responsible for interpreting their data.

…and in experimental socket liners like this gel liner from this 2018 study:

So it may be skin-surface sensors will simply improve to the point where surgically implanting the sensors in muscles won’t be necessary, though it is difficult to see them getting to the point where they’ll provide the same precise, intuitive control over individual fingers promised by Magnetomicrometry.

One of the reasons that we devote so many articles to surgical techniques that can improve the use of bionic limbs is because we know that amputees are trying to make wise decisions about their futures.

Surgical techniques like the Agonist-antagonist Myoneural Interface (AMI), Targeted Muscle Reinnervation (TMR), and Regenerative Peripheral Nerve Interface (RPNI) are easier to recommend because they are not tied to specific bionic devices and they also have other benefits such as pain reduction.

Implantable myoelectric sensors do not fall into this category. Indeed, as with any technology that may eventually have non-surgical alternatives, their ongoing use is not guaranteed. So, if it were us, we’d consider this type of solution only if it were packaged as part of a complete system such as Integrum’s e-Opra Implant System or Ossur’s product combinations with IMES. Otherwise, we’d probably adopt a wait-and-see approach.

For a quick summary of all related surgical techniques, see Surgical Techniques That Improve the Use of Bionic Limbs.