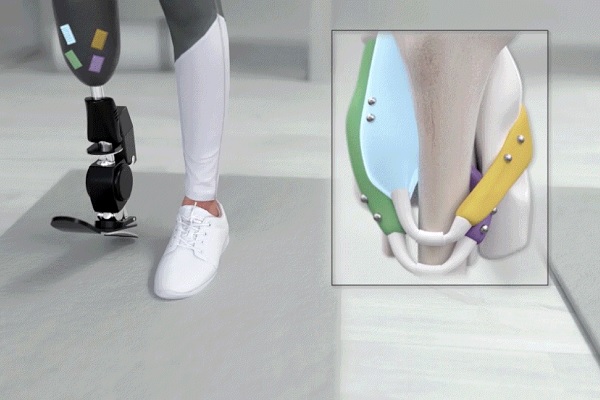 Users will not be satisfied until they have precise, intuitive control over bionic limbs. Magnetomicrometry may help fulfill this goal.

The Need for a Better Control System

We admire the functionality that myoelectric control systems currently provide for bionic limbs. Any improvement in the quality of life for those with a limb difference is worthwhile.

However, as most of our readers know, we also recognize the limitations of such systems. The myoelectric signals detected by skin sensors can degrade due to changes in the size of the residual limb, limb position, fatigue, and environmental conditions like heat or sweat. This can make for unreliable control.

Surgically embedding the sensors improves the situation but surgery is expensive and always carries with it the risk of infection, scarring, etc. In a world where tens of millions of people have limb differences, it is also not very scalable.

Even if we could wave a wand and magically perform this surgery on everyone who needs it, there is also the question of precision. Myoelectric systems can only detect the electrical activity generated by muscles when they move, not specific information about that movement. Existing systems also have trouble distinguishing more subtle movements, such as those needed to exert control over the individual fingers in a bionic hand.

Put another way, it seems that we’ve yet to find the perfect control system for bionic limbs. However, as usual, Hugh Herr and his research team at MIT may have come up with a solution.

Imagine a system where you inject a tiny pair of magnetic beads into a muscle that you wish to monitor. You then use sensors outside the limb to continuously monitor the exact positions of those magnets, which allows you to calculate not only the distance between them but also the speed of their movements. This allows you to precisely measure how much and how quickly the muscle is moving. Imagine further that if you instruct a bionic joint to mirror these movements, you will achieve precise control over it.

Fortunately, you don’t have to imagine any of that because it’s called Magnetmicrometry and it’s already here, at least in the lab:

Aside from being able to precisely measure muscle movements, this solution also offers the following benefits:

That makes controlling the movement of a bionic limb both precise and intuitive, but it doesn’t quite make using the bionic limb fully intuitive. What’s missing? For one, an innate awareness of the limb’s position without having to look at it. Fortunately, this piece of the puzzle was already solved by another innovation from Hugh Herr’s group: the Agonist-antagonist Myoneural Interface (AMI).

The Role of AMI

Every joint in the human body is controlled by a pair of muscles. The brain keeps track of the position of each joint by tracking the state of the muscle pair that controls it. For example, to curl your hand to your chest, you must contract your bicep. This, in turn, stretches your triceps. Even if you close your eyes, your brain can use these muscle movements to precisely calculate the position of your lower arm.

In a traditional amputation, the affected muscle pairs are severed. This deprives your brain of its innate awareness of the associated joint’s position. For example, if you had an artificial elbow and the bicep and triceps muscle pairing was severed, you would have no way to track the position of your bionic lower arm except to do so visually.

This is the situation that most amputees find themselves in today, i.e. they have no innate awareness of the position of anything below their point of amputation, including their prosthesis.

The main goal of AMI is to restore this awareness by surgically recreating the lost muscle pairings:

Even without the attachment of a bionic limb, this immediately improves the connection between the brain and the residual limb. For example, if the user closes his eyes and attempts to curl his missing arm, the associated muscle pairs will contract/extend in response, and the brain will receive information about this intended movement.

In short, the brain will know where the missing arm/hand should be.

Now tie this back to MM and you have a more complete solution:

It is this repeating loop that makes the system so intuitive. For example, to ascend a ramp requires the toe of a bionic foot to point upward. Using MM in combination with AMI would allow a user to easily handle this requirement without ever looking at his bionic foot, the same way that he would perform the task with a natural foot.

But I Thought You Said No Surgery?

You can still achieve precise control by using MM alone. It just means that you’d have to use visual cues to provide the necessary guidance. Unfortunately, there is currently no way to restore the brain’s awareness of limb position (called “proprioception”) without surgery.

Should these technologies fulfill their potential, we expect both AMI and MM to eventually be performed at the time of amputation, meaning no additional surgery will be required. But that’s purely our speculation.

What About Sensory Feedback?

Sensory feedback, which is the final piece of the puzzle for achieving precise, intuitive control over bionic limbs (especially bionic hands), is not addressed by either MM or AMI.

At present, it appears that a neural interface is our best bet for achieving advanced sensory feedback. However, Targeted Sensory Reinnveration (TSR) may also play a prominent role.

Human AMI trials are already underway, complete with the use of both lower and upper bionic limbs.

MM is still in the animal trial stage. Human trials should take place within a few years, so we are probably still four or five years away from commercialization.

That may sound like a long time but it is, in fact, only one upgrade cycle away for some bionic limb users.

AMI and TSR are not the only surgical technique that can improve user control over bionic limbs. For a list of others, with links to an article on each, please see Surgical Techniques That Improve the Use of Bionic Limbs.