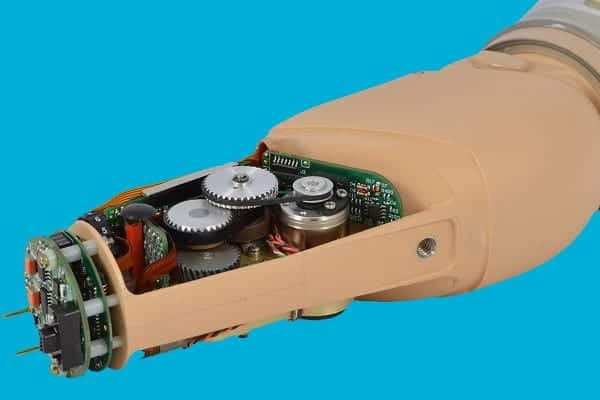 Motion Control’s Utah Arm is a microprocessor-controlled electric elbow that is compatible with multiple input systems, wrist components, and bionic hands or other terminal devices.

A Quick Look at the Utah Arm

As is the case with most of the electric elbows we review, there are few recent videos available to demonstrate the Utah Arm’s capabilities. The best one that we can find is this video from 2007, which is still relevant:

We’re not sure why there are so few videos on electric elbows. Perhaps it’s because they tend to be viewed more as components of bionic solutions rather than solutions in their own right. However, in addition to proving a powered elbow joint, they can also be used as a control platform for other components.

Here are the Utah Arm’s basic mechanical and control features:

As with most of its competitors, the Utah Arm is a mature device that has refined both its basic mechanics and its features over time.

The Utah can use different wrist components depending on the selected bionic hand or terminal device.

The Utah can lift 1 kilogram by flexing at the elbow (arm curl), which is lower than most of its competitors. It also has a passive lift capacity of 22 kilograms with the elbow fully locked.

The Utah Arm is described by Motion Control as “having high-strength plastic” with “structural components that have withstood the test of time, as demonstrated over 30 years of service to upper extremity wearers”.

However, as explained in the next section, this device is not water- or dust-resistant and can be damaged even by perspiration. Additionally, while it is capable of passively supporting a load up to 22 kilograms, the device’s User Guide warns that attempts to load the arm with more than 22 kgs may result in damage. By comparison, to avoid damage, Ottobock’s ErgoArm will release its locking mechanism if overloaded.

In general, we think it is wise to view all electric elbow devices as relatively fragile.

The Utah is not water- or dust-resistant. Even perspiration can severely damage the arm if it enters the electronic systems.

Depending on the model, the Utah Arm comes with up to five battery packs. Each battery pack provides sufficient energy to operate the elbow, wrist, and a terminal device.

The duration of use per battery pack varies significantly depending on usage and the types of components that make up the arm system.

When one battery pack runs out of power, users can quickly swap in another.

Note that some bionic hands may require a supplemental battery, which a prosthetist will have to build into the arm socket.

Motion Control provides a software application called MCUI App. The primary use of this software is to allow prosthetists to configure the Utah.

However, the app also allows users to calibrate the Utah Arm on their own using the Auto-Cal feature. Note, as these calibrations will replace those configured by the prosthetist, users should use Auto-Cal only at the direction of their prosthetist.

Unfortunately, we do not yet have reliable information on the net cash price to the consumer for a typical solution involving the Utah Arm.

If you have this information, please write us through our contact form.

The Utah comes with a standard two-year manufacturer’s warranty.

Users can pay to extend this warranty by an additional two years.

There do not appear to be any mandatory service obligations under the warranty.

Are you or have you previously been a Utah Arm user? If so, please share your insights with others looking at this arm as a possible prosthesis.

We do not yet have a sufficient number of survey participants to publish fair and accurate results for the Utah.

Considerations Before Buying the Utah Arm

We have not yet formed an opinion of the Utah Arm. As is the case with many electric elbows, it has been on the market for many years and certainly seems like a solid option for above-the-elbow limb solutions.

We won’t have anything additional to say about it until we get sufficient user feedback.