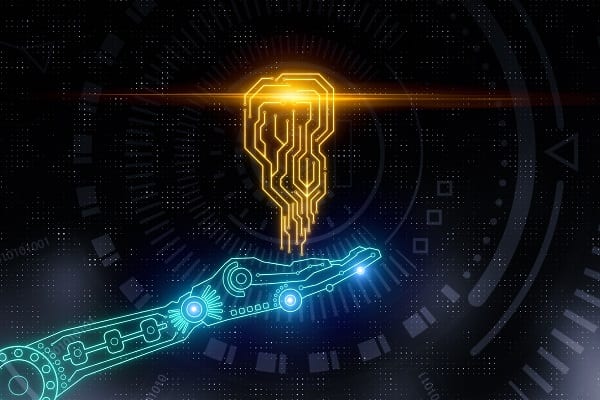 If you want to avoid surgery, combining myoelectric skin sensors with pattern recognition is likely the future for bionic arm and hand control systems. Not only is it more intuitive than a direct control system and easier to train — it’s also more adaptable to changing circumstances.

Most users of bionic arms & hands do not want to have to explicitly flex specific muscles to control their device. They especially don’t want to do this if it requires multiple steps for each action (e.g. position the wrist or thumb, select a grip, close the hand). This is slow, cumbersome, and tiring.

How can this happen? When we humans move our muscles, they generate electrical signals. These signals can be detected by myoelectric sensors placed against the skin, then translated into commands sent to an arm joint or bionic hand.

In a myoelectric direct control system, only two sensors are used and they are typically placed over an antagonistic pair of muscles. Flexing the muscles one way represents an open action, while the other way represents a close action.

Unfortunately, two sensors only allow for three different signals (open, close, and a co-contraction of both muscles simultaneously), and you can’t do much with three signals. You certainly can’t directly select specific grips or move individual fingers or attempt to control shoulder, elbow, or wrist joints in addition to controlling a hand.

Pattern recognition systems are different because they use many more sensors (typically 8 or 16). More importantly, they don’t expect you to flex specific muscles. They just expect you think/move as if you still had your natural arm/hand. This triggers a pattern of movements in the remaining muscles that can be translated into commands for bionic components.

It doesn’t even matter which patterns of muscles are triggered so long as they can a) be differentiated from each other, and b) are reasonably consistent. We say “reasonably” because artificial intelligence (AI) can be used to identify patterns and adjust for minor variations.

Okay, those are the basics. Now let’s get into the details.

The first prerequisite for using a pattern recognition system is that you must have enough space on your residual limb or another target site to accommodate a sufficient number of sensors (typically from 8 to 16).

Second, you must be able to generate enough distinctive patterns of muscle movement. If you had an amputation at or above the elbow and have lost the muscles you need to generate the requisite patterns, you may require a procedure called “Targeted Muscle Reinnervation”. In this procedure, nerves are surgically reassigned to alternative muscles to create the required muscle activity.

The third requirement — as is the case for all myoelectric sensors — is that the skin at the sensor sites must be conducive to detecting myoelectric signals.

Finally, you must be willing to devote significant time and effort to training.

To determine suitability, the provider of the pattern recognition system should a) supply some kind of evaluation system, and b) train prosthetists in the evaluation procedures. The company we list at the bottom of this article — Infinite Biomedical Technologies (IBT) — offers a model example of this kind of system.

We’ve created this subsection mainly to emphasize one central point: using pattern recognition for skin-surface myoelectric control does not alleviate the need for a great socket fit. Quite the contrary. Any prosthesis that relies on sensor contact with the skin’s surface is entirely dependent on a proper socket fit for maintaining that contact.

As emphasized in our article on myoelectric direct control, this doesn’t only mean a great fit when your arm is lying flat on the prosthetist’s desk in an air-conditioned office. It means a great fit in all arm positions and for all arm movements.

Additionally, you should test your socket fit in environments that range from cold and dry to warm and humid. If you encounter problems in different environments with either the socket or its embedded sensors, ask your prosthetist to help you mitigate these problems even if the system you are buying allows for quick recalibration (see below).

Training is fundamentally a matter of mapping patterns of muscle movement to the desired actions in the bionic limb. For example, one pattern can be mapped to use Grip 1, another to Grip 2, another to moving an elbow joint, and so on. In more advanced systems, patterns can even be mapped to individual finger movements.

The following is a rudimentary example of the process used to train a bionic hand:

However, in practice, training is more sophisticated and must support consistent repetition with good user feedback. For example, IBT offers a game-based, virtual learning/training environment where users can train as much as they wish:

As usual, there is no substitute for effort and persistence in this process. If you can identify and repeat consistent muscle movement patterns, you will be much happier with your level of control.

You will likely be forced to use your bionic arm/hand in unfavorable conditions. Even if you have worked closely with your prosthetist to mitigate these circumstances, your muscle movement patterns or the detection of those patterns will likely change.

When this happens, you must be able to quickly recalibrate your pattern recognition settings. For example, IBT allows users to do this via their mobile Sense application.

This ability to adjust one’s user control system so quickly and easily is a vital step toward increasing user satisfaction with bionic arms & hands.

What Does the Science Say?

If you have read our article on finding the right myoelectric control system, you know that studies on user satisfaction with direct control myoelectric arms & hands are not favorable.

Other studies have found that pattern recognition systems still suffer significant accuracy problems due to limb position and contraction intensity in real-world environments4.

However, we believe that recent improvements in training software, artificial intelligence, and the ability to recalibrate control systems “on the fly” are directly addressing these problems.

For a look at what we believe is the best myoelectric pattern recognition system currently on the market, see IBT’s Sense Pattern Recognition System.

If you’re looking for a control system that also provides advanced sensory feedback, see our article on neural interfaces for bionic hands.

For a complete description of all current upper-limb technologies, devices, and research, see our comprehensive guide.