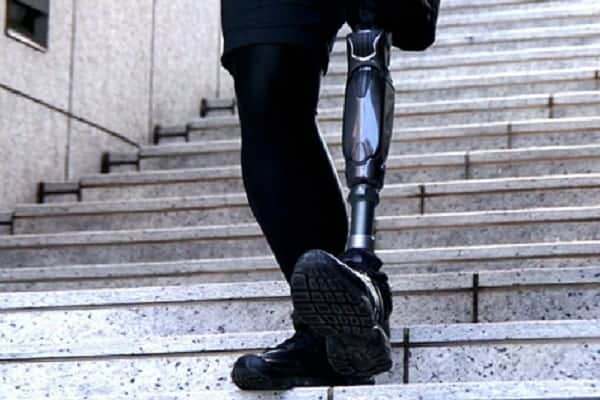 The latest version of Nabtesco’s Allux Knee (Allux 2) was launched in the U.S. in June 2017. Now distributed by Proteor USA, the Allux has some interesting features, especially its use of a 4-bar linkage system. But can it compete with its more established competitors?

A Quick Look at the Allux Knee

Unfortunately, there are not many good videos of the most recent version of the Allux Knee in action. The following is the best video we could find because, starting at 3:33, it describes some of the main benefits of the Allux’s design:

We elaborate on these benefits in the sections below.

For the Stance Phase, the Allux Knee is similar to other bionic knees in the same price category, such as Ottobock’s C-Leg, Ossur’s Rheo, and Blatchford’s Orion. In brief, sensors help maintain situational awareness of:

The microprocessor then adjusts the knee’s hydraulic resistance to match the situation.

The Allux’s stumble recovery feature is also similar to that of other bionic knees. When its microprocessor detects a stumble, the Allux immediately increases knee resistance (i.e. support) to aid in recovery and prevent a fall.

In the Swing Phase, the Allux has the same objectives as its competitors, namely to:

However, the Allux’s 4-bar mechanical design makes it easier to achieve some of these objectives.

Most bionic knees use a single-axis design, which is basically a simple hinge. The more this type of knee bends, the less stable it becomes.

The Allux Knee’s 4-bar linkage system allows the knee’s center of rotation to change as the knee bends. This:

Benefits and Drawbacks of the Allux Knee’s Design

We do not have any independent, third-party assessments of the Allux Knee’s performance in the Stance Phase or for stumble recovery. This is partly because the Allux 2 wasn’t released in the U.S. until 2017 and didn’t have proper distribution until 2018, when Proteor USA became its official distributor in the U.S. As a result, there are still relatively few Allux Knees being used “in the field”.

However, since the Allux uses the same design strategies as its competitors for these two core tasks, we expect its performance to be similar.

By comparison, owing to its 4-bar linkage design, the Allux has a definite design advantage in the Swing Phase. The shorter distance between the foot and the knee during this phase increases ground clearance, which should reduce the risk of tripping.

This same shorter distance occurs when sitting, which means that the knee height for the Allux is more likely to be level with the natural knee of the other leg, if present.

Users can also bend the Allux more fully — for example, while tying shoelaces for the other foot.

The Allux Knee is compatible with any K3 foot on the market. Unlike with many bionic knees, using a foot made by someone other than the knee manufacturer (in this case, Nabtesco) does not invalidate Allux’s warranty.

The Allux Knee’s battery can last for up to four days depending on the level of activity. This is a significant advantage over most of its competitors.

The Allux Knee has an IP rating of 44, meaning it can be splashed by water from any angle. However, it should not be submerged in water. Nor should it be exposed to salt water or chlorine.

The knee is also protected against objects that are larger than 1 mm but this does not mean that it is dustproof.

The Allux Knee weighs 1.5 kilograms. The maximum allowable user weight for the knee is 125 kilograms.

The Allux is rated for both K2 and K3 use. It is best suited for users who place a heavy emphasis on safety.

These operational modes can be customized by the prosthetist using Allux’s Adjustment App, which is also used to configure the knee:

Both applications seem to have clean, comprehensive interfaces.

The Allux comes with a three-year warranty that covers manufacturing defects. For this warranty to remain in effect, the knee must be serviced 24 months after purchase.

Users can also pay to extend the warranty to either five or six years. For the warranty to remain valid under these options, the knee must additionally be serviced 48 months after purchase.

We have not been able to find any documentation to verify that a free loaner knee will be provided during service inspections or repairs. However, we believe that this may have to do with the fact that the Allux Knee is manufactured by Nabtesco, which produces most of the documentation, but it is distributed in the U.S. by Proteor.

This distribution arrangement only began in 2018. For it to work, a loaner program of some kind will have to be put in place to support both sales and inspections/repairs, similar to most of the Allux’s competitors. However, sales of the Allux are still relatively low at this point. It may be that loaners are currently provided without a formal loaner system having been put in place. We have asked Proteor USA about this and will update this section when we get a response.

According to our information, the Allux Knee typically sells for between $30,000 and $40,000 US including the socket, prosthetic foot, and all prosthetist fees.

Considerations Before Buying an Allux Knee

Because the Allux is relatively new to the market, it has not yet generated any independent third-party reviews. Nor have we been able to find any formal studies comparing the Allux to its competitors. Consequently, we have no opinion of the performance or quality of the Allux. If you are considering the Allux, the best thing to do is take one for an extended test, which is what you should do before buying any bionic knee.