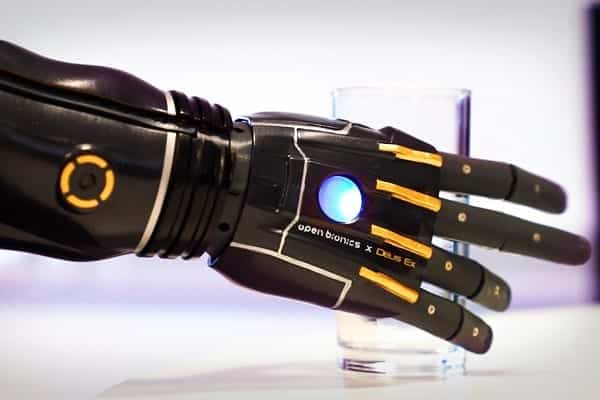 The Hero Arm from Open Bionics is one of the most affordable bionic arms currently on the market. Each Hero Arm is custom designed for the wearer and created using 3D printing. With attractive covers that come in a variety of styles and colors, the Hero Arm helps overcome the stigma sometimes experienced by those with limb differences. Covers from popular movies like Star Wars, Iron Man, and Frozen make it especially appealing to children.

A Quick Look at The Hero Arm

The Hero Arm doesn’t aim to be the most technologically advanced bionic arm/hand on the market. It doesn’t offer an auto-positioned thumb, powered wrist options, or automatic grip adjustments like Ottobock’s Michelangelo Hand or Ossur’s i-Limb.

Instead, the Hero Arm provides core myoelectric hand functionality using a proven design, all at 1/4 the price of top-tier hands.

Based on user reactions, it seems to have hit its mark. Although the following video is a bit older and uses a test hand, it does a great job of showing the variety of tasks that the Hero Arm can perform.

The Hero Arm is controlled by a combination of myoelectric signals and manual adjustments.

The hand has multiple preset grip patterns that support the most common hand movements. You can also manually rotate the wrist and explicitly position the electronic thumb.

To open or close the hand, you simply use the same muscle actions you would to close/curl or open/extend a natural hand:

EMG sensors in the Hero Arm detect these muscle movements and translate them into corresponding close or open actions in the bionic hand. The resulting finger movements depend on the selected grip pattern.

Here is a short demonstration of some of these functions:

Open Bionics has produced a number of short videos demonstrating how to use the Hero Arm for different tasks. You can view these videos at the Open Bionics’ YouTube channel. As the videos demonstrate, once the user is familiar with switching between grip configurations and explicitly positioning the wrist and/or thumb, using the arm becomes quite intuitive.

Some myoelectric hands, such as Ottobock’s bebionic Hand, require the user to manually position the thumb, typically with one’s free hand. The position of the thumb then dictates the availability of certain grip patterns.

More advanced hands, such as the Michelangelo, i-Limb, Taska, and Psyonic’s Ability Hand, automatically position the thumb based on the selected grip pattern.

The Hero Arm falls in between these two designs. The user can either manually position the thumb or electronically position it through an explicit myoelectric signal.

The speed and force of the Hero Arm’s grip are determined by the degree to which the control muscles are tensed. Tensing the muscles gently and slowly makes it possible to handle small or delicate objects without breaking them. Tensing the muscles quickly and with more force allows the user to grip objects more firmly.

The Hero Arm has a lift capacity of 8 kg, which is the lightest of all myoelectric hands/arms on the market.

It is clearly not designed for heavy-duty activities.

Despite its low lift capacity, the Hero Arm is made of Nylon 12 — the same material used in ski boots — and is quite rugged. Despite searching far and wide, we’ve been unable to find any complaints about its durability.

One of the biggest selling points about the Hero Arm is its price, which is $15,000 to $20,000 US when sold in the United States. This price includes a clinical assessment, measurement and fitting fees, the arm itself, a one-year warranty, and one set of Hero Arm covers.

To see how the Hero Arm’s price compares to its competitors, please see our Bionic Hand Price List.

The Emotional Impact of Getting a Hero Arm

One of the great contributions that Open Bionics has made to overcoming limb differences is the realization that prostheses are more than just artificial devices attached to one’s body. They can also be hi-tech, ultra cool, and as much a part of one’s personal style as clothes, shoes, or hairstyle.

…and the difference both the Hero Arm’s function and appearance have made to this young girl’s life:

How important is this new emphasis on the attractiveness of a prosthesis? Children who previously felt isolated or self-conscious because of their limb difference appear to be much more confident after receiving a Hero Arm. Instead of being teased or bullied by classmates, they are now being admired. Some classmates are even asking how they can get a bionic arm!

In fact, this emotional benefit is likely so important that we’d like to see public and private insurance take it into account when determining coverage policies. For more information on this issue, see The Revolution in Prosthetic Aesthetics.

Of course, this isn’t just about appearance. Note the new capabilities that the Hero Arm has given this young artist:

Open Bionics was founded by Joel Gibbard and Samantha Payne in 2014.

As is the case of many of the smaller bionic companies, they seem driven as much by a genuine passion to help others as they do a desire to build a successful company.

Joel started working on robotic hands in his teens and designed hundreds of prototypes before bringing the Hero Arm to market. Here he is in a 2014 TEDx Talks video discussing his early experiences and his commitment to helping those with limb differences.

Considerations Before Buying the Hero Arm

First, if you want to buy a myoelectric arm for a child, we think the Hero Arm is a slam dunk. Open Bionics clearly understands the needs of children with limb differences. They have an array of Disney-themed covers. They sell the Hero Arm for one of the lowest prices on the market. And they even have a special re-fit program that resizes the arm as a child grows. No one else in the market caters to children like this.

If you’re an adult with a limb difference, you have to consider a number of factors. If you need to pick up objects heavier than 8 kg or operate machinery with your myoelectric hand, the Hero Arm isn’t for you. If you’re going to use it for rough outdoor work or even on a shop or manufacturing floor, the Taska hand is probably the better choice.

But if you’re going to use it for light tasks and you don’t need all the advanced features of leading myoelectric arms/hands, then you may well find that the Hero Arm suits you perfectly — especially for the price!