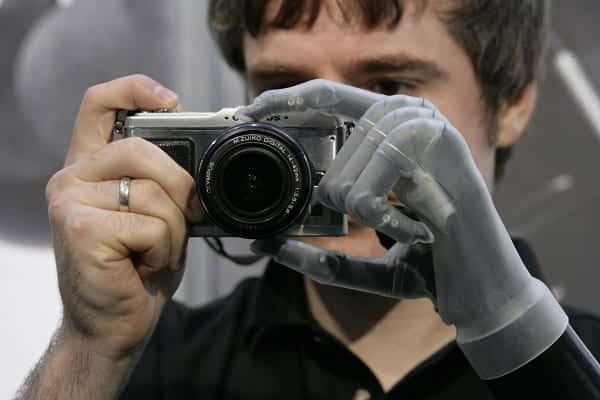 Ossur’s i-Limb hand was the world’s first commercial bionic hand. Launched in 2007 and acquired by Ossur in 2016, the i-Limb is available in three models: Access, Ultra, and Quantum. Additionally, each model offers a variation with titanium fingers, which increases its carrying capacity by 50 %. The i-Limb remains a state-of-the-art bionic hand at the upper end of the market in both functionality and price.

A Quick Look at the i-Limb

This video is a bit unusual because it’s filmed from a first-person POV, but it does a good job of showing the variety of tasks that the i-Limb Quantum can perform.

It’s also a great demonstration of the value of having two working hands — something governments need to take into account when setting public insurance policies.

The i-Limb offers an industry-leading 36 different grip patterns, including 12 that can be customized by the user.

This may sound impressive, but if you look closely at the preceding video, you will see that most of the tasks are performed using the same core grips. This is consistent with limited studies on grip usage.

The key question, then, is how well does the i-Limb perform these grips?

We cannot find any evidence that the i-Limb’s core control system (i.e. the accuracy with which it translates myoelectric signals into bionic hand actions) is superior to other myoelectric hands. Indeed, the i-Limb does not seem to be as fluid or intuitive as its main competitor, Ottobock’s Michelangeolo Hand, when it comes to fine motor skills.

Here, for example, is a short video of a man using an i-Limb to tie his shoes:

And here is a man performing a similar task with his Michelangelo Hand:

The differences are subtle but they are there.

However, the i-Limb doesn’t rely on its core control system to distinguish itself. Instead, it employs a number of innovative features to augment user control.

In a natural hand, the thumb performs one of three roles. It gets out of the way, as it does when carrying a shopping bag or suitcase. It can rotate downward and/or outward to oppose one or more fingers, which is how we use it most of the time. And it can also extend out from a closed hand, essentially as a balancing force against the knuckles, as it does when we carry a coffee cup.

Some bionic hands require users to manually position the thumb, typically by using their other hand.

The Quantum and Ultra models of the i-Limb automatically rotate the thumb into the correct position based on the grip. This is similar to the approach used by Psyonic’s Ability Hand and Taska’s bionic hand, but slightly inferior to the thumb rotation exhibited by the Michelangelo Hand.

We humans frequently handle objects that are irregularly shaped. A wine glass is a perfect example. If you grasp a wine glass and all four fingers stop closing as soon as the thumb and forefinger encounter the bowl, you will not achieve the ideal grip.

With the i-Limb, the thumb and forefinger automatically stall out in response to resistance, but the middle, ring, and pinky fingers each continue closing until they, too, encounter something solid. In the example of a wine glass, they will correctly grasp the bottom of the bowl and the stem.

This feature allows the i-Limb to automatically conform to many different shapes.

As mentioned above, the i-limb’s fingers will stop closing after encountering a certain amount of resistance. However, there are times when a stronger grip is needed. To achieve this, the user can increase the grip force by sustaining the close signal. This is ideal for, say, grasping a jar tightly enough to open its lid.

Sometimes, users accidentally trigger an open signal. This can cause the hand to drop an object. To prevent this, the i-Limb detects short, unintended open signals and automatically re-closes the hand.

Most bionic hands offer a method of rotating through available grip patterns. Repeated open gestures is one common way of doing this, but this is impractical when there are so many available grips.

The i-Limb compensates by allowing users to directly select specific grips. This can be done via four different techniques, as explained in the next 3:10 of this video (bear with the PowerPoint slides; the periodic inset videos are highly informative):

The i-Limb hand with Titanium fingers can lift a maximum of 32 Kg per finger and 90 Kg overall.

This puts the i-Limb at the top of the class in lift capacity.

As with most bionic limbs, it is difficult to get an official price for the i-Limb..

But based on our research to date, it appears that i-Limb prices range from about $45,000 USD for the Access model to more than $70,000 for the Quantum model.

To see how this compares to other bionic hands, check out our Bionic Hand Price List.

Considerations Before Buying the i-Limb

Here is how we think about the i-Limb: if you are determined to get the most technologically advanced myoelectric hand, you basically have two choices. You can get either the i-Limb or the Michelangelo Hand.

If price is not an issue, and you will be performing only light duties, go with the Michelangelo Hand.

If you’ll be carrying or using moderately heavy objects, or some of the i-Limb’s added grip features are important to you, go with it. But in making this choice, do not fool yourself into thinking that the i-Limb is extra-rugged. The only multifunction, myoelectric hand that is specifically designed for ruggedness is the Taska hand. And even it’s not designed for true heavy-duty work. If you need to support that, you’ll have to purchase an extra device like an electronic clamp or hook.