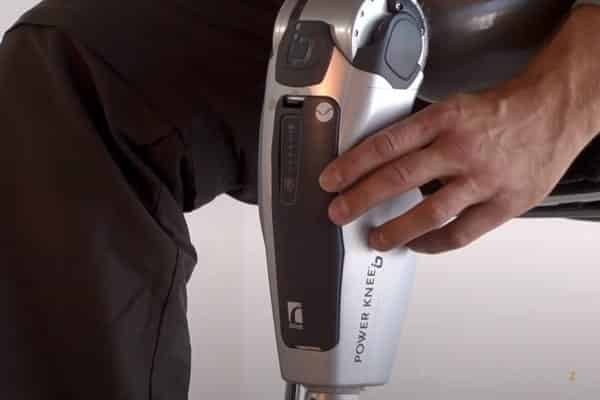 Ossur’s Power Knee is the only bionic knee that augments the user’s residual limb with electric power. This significantly reduces the user’s energy expenditure while also assisting in tasks like standing and ascending stairs. It also helps ensure greater ground clearance during the Swing Phase.

A Quick Look at the Power Knee

We would have preferred to show you a more recent video of the Ossur Power Knee but this video from 2013 remains the best quick introduction:

If you watch this video closely, you will likely notice that Allison’s gait is not as smooth as the gait exhibited by the users in our videos on other bionic knees.

The Power Knee partly compensates for this with motorized power, which is what makes it so unique.

When walking, there is a point where the load-bearing foot pushes off from the Stance Phase to begin its Swing Phase. It is also the point where the user swings that foot/leg forward as part of the next step:

In a natural foot/leg, these actions are powered by muscles and tendons. The quadriceps, in particular, plays a key role in lifting the leg and swinging it forward, as well as generating most of the power to rise from a sitting to a standing position or to ascend stairs.

Most Power Knee candidates are missing part or even all of their quadriceps muscle. To compensate, the Power Knee replaces the missing power with an electric actuator. For example, when ascending stairs, it is the actuator that helps straighten the knee to lift the user. During the Swing Phase, the actuator causes the knee to bend, which helps pull the foot up to create more clearance between the toes and the ground.

The short story is that the microprocessors in most bionic knees have three main tasks:

The microprocessor in the Power Knee has an additional task: to determine when to apply power to the knee actuator to generate push and/or lift.

Benefits and Drawbacks of the Power Knee

The benefits are considerable. As always, we prefer to show you rather than make you read text, so we dug up this training video for the Power Knee. Again, it is a bit older than we’d like (2011) but it does a great job of demonstrating the Power Knee’s key functions starting at 8:20:

To summarize, the Power Knee uses motorized power to help:

This is in addition to the typical bionic knee benefits of managing knee resistance (support) throughout the Stance Phase and triggering the Swing Phase.

As is the case with most companies that make both bionic knees and prosthetic feet, the Power Knee is best paired with Ossur feet — in particular their Pro-Flex line of feet.

The Power Knee’s battery can last for up to 12 hours of continuous use depending on the level of activity.

If completely drained, the battery requires 3.5 hours to fully charge.

As with most bionic limbs, it is best to charge the Power Knee’s battery each night.

We have been unable to find an official IP rating for the Power Knee. The only official statement from Ossur is contained in the Power Knee’s user manual, which states that it “is suitable for use in any environment except where spillage or immersion in water or any other fluid is possible”. The manual also contains a warning to avoid intense dust.

This sounds similar to the water and dust ratings for Ossur’s Rheo Knee and Rheo Knee XC, both of which have an IP rating of 34.

The Power Knee weighs 2.7 kilograms. This is significantly heavier than other bionic knees. However, due to its power augmentation, the knee typically feels much lighter to the user.

The maximum allowable user weight for the knee is 165 kilograms.

The Ossur Power Knee is rated for K3 users. It is particularly useful for lower-to-mid-level K3 users who have a shorter residual limb (or hip disarticulation) and lack their full above-the-knee musculature.

Ossur does not offer software to end-users of the Power Knee. They only offer a software package to clinicians and physical therapists called the PowerLogic Workbench.

Ossur offers a full three-year warranty on the Power Knee including any repair costs due to defects. Under this warranty, the knee must be sent to Ossur for mandatory maintenance within 20 months after purchase.

The warranty can be extended to five years at the user’s option. Under this option, the Power Knee must be sent to Ossur within 20 months and within 40 months after purchase.

Where possible, Ossur provides a free service unit during repair and service inspections.

According to our information, the Power Knee typically sells for between $70,000 and $90,000 US including the socket, prosthetic foot, and all prosthetist fees.

Considerations Before Buying a Power Knee

There are three main considerations before purchasing Ossur’s Power Knee: