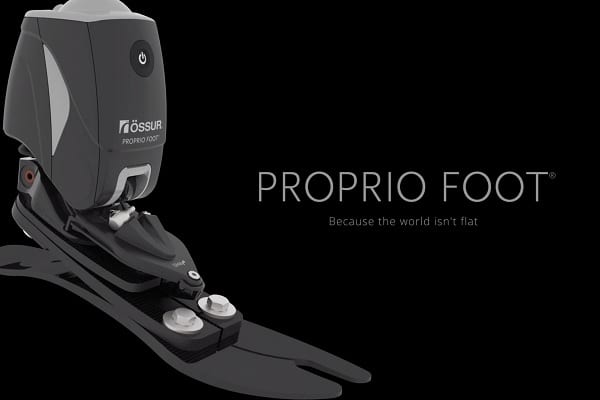 Ossur’s Proprio Foot includes many of the advanced features found in other foot/ankle systems. However, it uses an inter-step ankle accommodation strategy, which some view as inferior to the within-step strategies used by other bionic foot/ankle systems.

A Quick Look at the Proprio Foot

This first short video demonstrates two of the main advantages of using a Proprio Foot:

This next video is a commercial but it does contain some lengthy sequences of Proprio users walking on different types of terrain:

Clearly, the Proprio Foot is a capable bionic foot/ankle. However, its use of an inter-step ankle accommodation strategy alone raises some questions. We explain what this means below.

The reported ankle ROM for the Proprio Foot is 16 degrees.

The foot component adds another 17 degrees, for a total ROM of 33 degrees.

As mentioned, the Proprio uses an inter-step ankle accommodation strategy. This means that it only makes adjustments to the ankle when the foot is in the Swing Phase of the gait cycle. Furthermore, it does not make these adjustments on each step but instead requires multiple steps to adjust, depending on the terrain.

For example, the Proprio requires 3 prosthetic steps before it adjusts the ankle to an 85 % match with the slope of a ramp. Adapting to stairs, both ascending and descending, occurs after the first prosthetic step. This means that the user has to take the necessary precautions on that first step.

To provide the user with extra toe clearance during the Swing Phase, the foot automatically provides four degrees of dorsiflexion after the first two prosthetic steps. This occurs on even surfaces, ramps, and stair ascent, but not on stair descent.

Note that some of these automatic adjustments do not occur at slow walking speeds.

Speaking of walking speeds or, more accurately, gait speed and cadence, the Proprio Foot will calibrate itself to the user’s natural gait but requires a 15-step sample to do so.

Finally, the Proprio will automatically detect when the user is pedaling a bicycle and set the foot in a neutral position. It also has a relax mode that makes it more comfortable to sit and easier to stand from a sitting position, as shown in this short video:

The Proprio Foot does not use electric power to augment push-off at the end of the Stance Phase of the gait cycle, but it does optimize energy storage and reuse through its carbon fiber foot.

The only bionic foot/ankle currently on the market that enhances push-off with electric power is Ottobock’s Empower model.

Ossur does not publish details of the Proprio Foot’s sensors and microprocessor(s) to the general public.

What we do know is that the Proprio only attempts to automatically adjust the angle of dorsiflexion and plantar flexion. Since the device does not use hydraulics, there is no attempt to actively manage flexion resistance. However, the foot component used with Proprio does use a mechanical blade system to generate resistance during the Stance Phase, so the issue is being addressed.

The primary advantages of the Proprio’s microprocessor system are:

The Proprio Foot’s battery life is 18 to 36 hours, depending on usage.

To fully recharge the battery when it is completely drained requires roughly four hours.

The Proprio Foot is listed as an IP34 device. This means that it is protected against water splashes and solid foreign objects of 2.5 mm in diameter and greater. This is among the weakest IP ratings of all bionic feet.

According to our independent data from August 2018, the Proprio Foot weighs 1,428 grams, but as much as 1,600 grams at its largest foot size.

This is comparable to the other bionic foot/ankle systems except for Blatchford’s Elan Foot, at 1,200 grams, and Fillauer’s Raize, at only 749 grams.

The maximum user weight for the Proprio is 125 kilograms.

Ossur describes the Proprio Foot as being suitable for “low to moderately active amputees”. Note, however, that Medicare requires users to have a K3 or higher rating for reimbursement for this type of device.

The Proprio is not intended for high-impact sports, such as running, basketball, etc.

Ossur comes with a user application called the Ossur Logic App, which is available for IOS and Android devices.

The app allows users to:

The warranty can be extended at the user’s option to as many as five years.

According to our information from individual users, the Proprio Foot sells for between $20,000 to $25,000 US inclusive of all prosthetist fees.

To see how the price of the Proprio compares to its competitors, please see our Bionic Foot Price List.

The only bionic knee that we have seen explicitly paired with the Proprio Foot is Ottobock’s Rheo Knee.

The Proprio’s warranty does not explicitly forbid pairing it with another knee, even if that knee is from a different manufacturer, but this should be clarified with your prosthetist.

Are you or have you previously been a Proprio Foot user? If so, please share your insights with others looking at the Proprio as a possible prosthesis.

We do not yet have a sufficient number of survey participants to publish fair and accurate results for the Proprio.

Considerations Before Buying a Proprio Foot/Ankle

Without sufficient feedback from real end-users, we have not yet formed an opinion of the Proprio Foot. We do think that its lack of hydraulics and its use of an inter-step ankle accommodation strategy raises questions that should be discussed with a prosthetist. Is the Proprio still at the cutting edge of bionic foot/ankle technology or is it one step behind?

If you have an opinion on this, we’d love to hear from you!