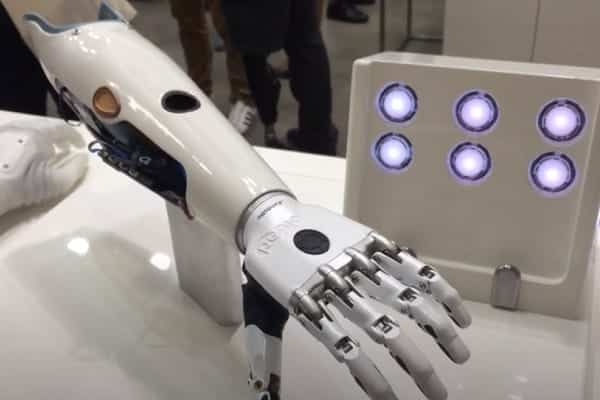 Ottobock’s bebionic hand is well established in the bionic hand industry. But surging competition and underwhelming reviews from our User Satisfaction Surveys suggest that it may be in need of an upgrade.

A Quick Look at the Bebionic Hand

We rarely get a video review of a bionic hand from someone other than the manufacturer. In this case, we have the benefit of hearing from Christoffer Lindhe. Christoffer is not only a long-time prosthesis user. He also owns his own prosthetics company. Here, he gives us an honest assessment of his bebionic hand.

Note the two main observations from this review:

Similar to most bionic hands currently on the market, the bebionic is usually controlled via a direct myoelectric control system. That is, myoelectric sensors placed against the skin of the residual limb detect muscle movements. A control system then translates these movements into commands for the bionic hand, typically to open or close the hand. Exactly which fingers open or close depends on the selected grip.

The bebionic hand offers 14 different grips. Here is a quick demonstration of these grips:

These grips are divided into two groups: primary and secondary. The user can switch between groups by pressing a button. Additionally, some grips are only available if the thumb is in an opposed or non-opposed position.

Users can rotate between individual grips by triggering two open signals in succession, though a clinician can set up the hand to use a different rotation signal.

The bebionic can also be paired with a more sophisticated sensor & control system called Myo Plus, which is also from Ottobock. This system uses additional sensors and allows more intuitive control over bebionic’s functions, especially changing grips.

To place the bebionic’s thumb into an opposed or non-opposed position, the user must manually rotate it. This is not a major drawback in most circumstances. To change tasks often requires some form of preparation with myoelectric hands, such as selecting an appropriate grip. In most cases, users intuitively rotate the bebionic’s thumb into place with their free hand.

However, there are situations where this is not convenient, such as when both hands are needed for a task. Also, this is an inferior solution compared to hands like the i-Limb Quantum, the TASKA hand, and Ottobock’s own Michelangelo Hand, which offer electronic thumb rotation. And it is far behind the anticipated functionality of the Atom Touch, which will allow independent thought control over its electronically powered thumb.

Another concern with bebionic’s thumb is the need for a technician to adjust it before it can participate in certain grips. This adjustment is necessary for the thumb to correctly line up with the opposing fingers.

Proportional control refers to the ability of users to control the speed and force of a bionic hand’s grip by increasing or decreasing the speed/strength of the muscle movement needed to trigger a close signal.

For example, to pick up something fragile like an egg, the user must generate a much slower/softer close signal in the residual limb.

The bebionic hand offers this feature but it depends entirely on the user’s visual guidance. By comparison, Psyonic’s Ability Hand uses pressure sensors in its fingertips to provide feedback to the user through vibrations in the residual limb. The user can then adjust his or her grip strength accordingly. Using this approach, a user can pick up an eggshell, without breaking it, while blindfolded!

We believe that sensory feedback is the way to go and expect most bionic hands to follow suit over time.

When the bebionic senses that an object is slipping from its grasp, it automatically increases its grip strength.

This is similar to how some microprocessor knees sense a stumble and automatically adjust to avoid a fall. We believe that this type of automatic intelligence should be adopted by all bionic limbs, especially where safety is concerned.

To our knowledge, the bebionic does not offer any form of sensory feedback.

The bebionic comes in two sizes:

The bebionic hand can lift up to 45 kilograms. Individual fingers can lift 25 kg, and the hand’s knuckles can support up to 90 kg when pushing off from a seated position.

Only the i-Limb Quantum with titanium fingers offers a superior lift capacity of 90 kg.

Bebionic’s grip force depends on the selected grip. However, it is capable of generating 140.1 Newtons of force, which should be more than adequate for most light-to-medium tasks.

We have encountered multiple mentions of durability issues with the bebionic hand. Most are merely passing references in videos like the first video in this post.

In the few cases where formal studies describe durability complaints from users, the bebionic is often mentioned, unlike its Ottobock cousin, the Michelangelo Hand.

However, we should note that durability, especially broken fingers, has been a long-running problem with many bionic hands. It has only been in recent years that we’ve seen an increased emphasis on finger pliancy and durability.

Put another way, we don’t want to suggest that the bebionic hand is the only one with durability issues. But we do think it’s important for potential buyers to be aware of its limits.

Again, Christoffer Lindhe puts all of this into context in this next video. Note, in particular, how he uses different prosthetic arms and attachments for different tasks. Durability is one of the major factors driving this approach.

We have been unable to find any information on bebionic’s official IP rating. However, Ottobock clearly states that “direct exposure to water, or situations where dirt and dust are prevalent, should be avoided, as these have the potential to interfere or damage the hand’s performance.”

Users can use bebionic gloves to provide additional protection against water and dust but the hand itself is clearly not intended to operate in wet or dirty environments.

Ottobock offers an optional cosmetic glove for the bebionic hand. This comes in eight variations of skin tone or jet black for a more high-tech look. As mentioned, these gloves also offer additional protection against water and dirt.

The bebionic has multiple battery options. However, the only information that we have been able to get on how long the batteries last or how long they take to recharge is that they typically last a day and should be charged overnight.

This is a subject that should be discussed in more detail with a prosthetist.

The bebionic does not offer software for the end-user. However, it does offer a comprehensive software solution called “bebalance+” that is used by clinicians for setup & configuration.

The bebionic can be used in above-the-elbow solutions so long as it is paired with either Ottobock’s ErgoArm or DynamicArm.

According to our information, the bebionic sells for between $30,000 and $40,000 US for a typical below-the-elbow solution, including all prosthetist fees.

The bebionic comes with a 24-month manufacturer’s warranty. Users can also pay to extend the warranty for up to an additional three years.

Are you currently using the bebionic hand or have you used it in the past?

We do not yet have a sufficient number of survey participants to publish fair and accurate results for the bebionic hand.

Considerations Before Buying the Bebionic Hand

The bebionic is a capable hand from a good company. However, it does appear to suffer from durability problems. We not only hear this anecdotally. We also see it in the User Satisfaction Surveys that we have received to-date, where users specifically mention durability issues as their main complaint.

Also, new competition has emerged since the bebionic’s last update that is pushing the technology envelope. The Nexus Hand from COVVI, the Zeus Hand from Aether Biomedical, and the Ability Hand from Psyonic all have features that match or exceed the bebionic’s feature set, and all three of those devices sell for less.

To be fair, we do not think that the bebionic is inherently inferior to these or other cutting-edge bionic hands. We just think that it’s at a point in its update cycle where it’s slipped a bit behind the competition. Of course, that could all change in flash should Ottobock release a new version of this venerable brand.