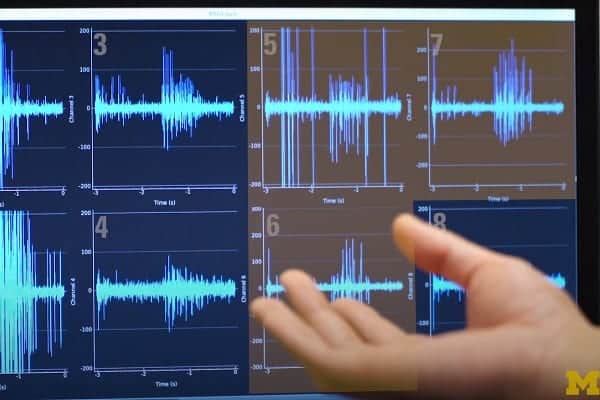 The Problem of Persistent Pain

If you spend much time on amputee support forums, you will quickly realize that many amputees struggle with several types of pain including neuromas and phantom limb pain.

Neuromas are painful masses that often form around nerves that were severed during amputation. These can be so painful that they can limit the motion of the residual limb and make contact with a prosthetic socket unbearable. In the following picture, the purple mass represents a neuroma:

Phantom limb pain occurs when patients experience pain in the missing portion of their limb. Scientists don’t know why this occurs but suspect that, in the absence of sensory feedback, pain is the body’s way of telling the brain that something is wrong.

In some cases, there may be a link between a neuroma and phantom limb pain, though the science on this is not conclusive.

To move a natural limb, the brain sends electrical signals to the nerves, which then trigger the required muscle contractions. Following amputation, muscles in the residual limb atrophy from a lack of use. Weak muscles generate weak myoelectric signals, which are difficult to detect with the myoelectric sensors used to control a bionic device.

RPNI as a Treatment for Neuromas

To understand how RPNI is used to treat neuromas, it is best to examine a side-by-side comparison of the traditional surgical treatment of a neuroma versus a technique called Targeted Muscle Reinnervation (TMR), which shares some similarities with RPNI. We’re using this comparison simply because it has a good diagram, courtesy of The Institute for Advanced Reconstruction.

In the traditional treatment on the left, the severed nerve is simply buried under nearby muscle tissue. Over time, the buried nerve may form another neuroma.

In the treatment on the right, the nerve is transferred to another muscle in a way that a) allows the nerve to grow into the muscle over time, and b) integrates with motor nerves to facilitate muscular contractions. Put another way, the nerve and muscle are more naturally integrated, though the preceding diagram does a poor job of showing the specific surgical technique used to achieve this.

RPNI is sometimes referred to as a “mini-TMR”. Instead of moving the nerve to a different muscle site, the nerve ending is wrapped in a small muscle graft, often taken from the patient’s thigh muscle. The nerve then grows into this graft over time, innervating it.

If all goes according to plan, this will prevent another neuroma from forming. Indeed, one 2016 study1 found that patients who underwent RPNI treatment reported a 71% reduction in neuroma pain and a 53% reduction in phantom pain.

For those of you who want a more detailed look at the ability of RPNIs to reduce pain, we strongly urge you to watch from 1:29 to 19:46 this recent video presentation on the subject. Don’t get intimidated by technical terminology in some of the sections. In between, there are significant sections that are easily comprehended by those of us without advanced medical training. Note, also, that the video contains some graphic images. But, if you’re suffering from pain, this is a must-see!

RPNI as a Method of Amplifying Muscle Signals

Following RPNI surgery, after the nerve has innervated the muscle graft, certain attempts to move the missing limb (e.g. phantom hand) will send a signal to the RPNI nerve that will cause a strong, detectable contraction in the associated muscle graft. This can be seen in this ultrasound video:

These signals can be detected using myoelectric sensors placed against the skin’s surface in proximity to the RPNI. But a superior method of recording the signals is to implant the sensors directly in the RPNI muscle grafts.

What’s even more exciting is that surgeons can split a nerve bundle into multiple RPNIs, which allows for more discrete muscular actions.

The reason that scientists want to amplify muscle signals and distinguish specific movements is to improve control over bionic devices. The following video demonstrates this improvement for patients who have undergone RPNI. Notice, in particular, how responsive the bionic hand is during the Rock, Scissors, Paper game that starts at 1:57:

Keep in mind as you watch this video that the end-users are not trying to fire explicit muscles to open/close their bionic hands, and they don’t have to consciously change grips before attempting a task — both significant areas of complaint with many commercial bionic hands. These end-users are simply thinking about moving their phantom hand a certain way and the prosthesis is responding accordingly. This is the kind of intuitive control that end-users truly desire.

Implications for Future and Current Amputees

RPNI is not the only new amputation surgical technique to emerge since the early 2000s. We have already mentioned Targeted Muscle Reinnervation (TMR). The Agonist-antagonist Myoneural Interface (AMI) is another, which not only improves muscular & prosthetic control but also restores the patient’s innate sense of the phantom limb’s position in space. This ability to track position can then be correlated with the movements of a bionic device. Because AMI reconnects the missing limb to the brain in this important way, it can also help eliminate phantom pain.

Viewed from a slightly different angle, RPNI, TMR, and AMI can not only help reduce or eliminate pain. They also essentially prepare a patient’s residual limb for the future use of bionic devices.

These issues are so fundamental, we believe that these techniques will eventually become standard practice for all new amputations, depending on each patient’s circumstances. They’re also applicable to existing amputees through revision surgery.

What, then, should amputees do in light of these developments? In our opinion, anyone contemplating amputation from this point forward should at least ask their doctor/surgeon about the possibility of incorporating these techniques into their eventual surgery, even if this means participating in a clinical trial. We also believe that any existing amputees who are suffering from severe neuromas or phantom pain, or anyone frustrated with the lack of intuitive control over their bionic limbs, should at least explore these subjects with their medical advisers.

We’re recommending this proactive approach because these technologies will eventually scale out. For example, TMR has been in use for some time and is now part of standard care for amputation surgeries. RPNI has already been applied to hundreds of amputations and AMI’s use in trials is also growing. Once these techniques have been perfected, they may well spread quickly to a surgeon near you. And don’t forget that these techniques apply to both upper and lower limbs, though the use cases may vary for certain features.

For more information on RPNI, see the University of Michigan’s main page on the subject.

For a quick summary of all relevant surgical techniques, see Surgical Techniques That Improve the Use of Bionic Limbs.