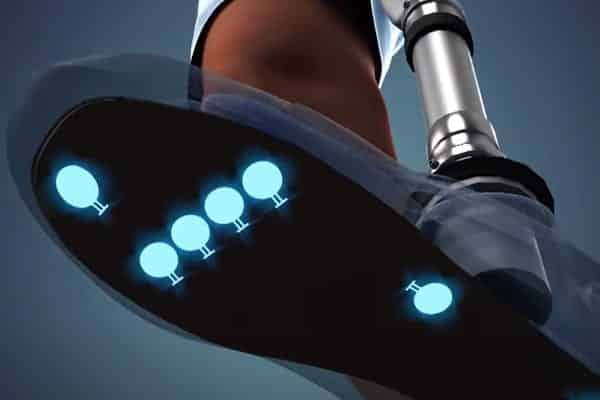 Sensory feedback is less critical for bionic feet than it is for hands but it can still improve prosthetic performance and help reduce phantom pain.

The Different Types of Sensory Feedback

Not all of the feedback available for bionic feet matches the traditional definition of sensory input. Osseointegration and the Agonist-Antagonist Myoneural Interface (AMI) provide feedback that may be just as important.

However, in this article, we’re going to focus on the traditional forms of sensory feedback so that users who have not undergone osseointegration or AMI can clearly understand their options.

We’re describing this technology first because it is already commercially available, though currently limited to Germany, Austria, and Italy.

It consists of a combination of surgery that we presume is a form of Targeted Sensory Reinnervation (TSR) (we’re trying to clarify), plus a foot insole with embedded sensors. What makes this solution particularly attractive is that the insole can be used with existing prosthetics, i.e. it is not dependent on a certain brand of prosthetic and does not typically require any change to the prosthetic itself.

That’s our summary. The actual process consists of four therapeutic steps that are best described by the following official videos (about two minutes each). If you’re short on time, we urge you to at least watch the fourth video.

Here are our observations:

SENSY shares many similarities with Saphenus including the potential benefit of reduced phantom pain. The big difference is that this version of SENSY uses a true neural interface to provide sensory feedback to the brain (i.e. direct interaction with the nerves instead of stimulating reinnervated skin). In an attempt to convey information on leg position, it also gathers sensory input from a bionic knee.

SENSY is still in the prototype phase and is not yet ready for commercial use.

The Massachusetts Institute of Technology (MIT) has been at the forefront of bionic leg research and development for many years. They have developed multiple technologies that have subsequently become successful commercial bionic devices (e.g. Ottobock’s Empower Ankle, and Ossur’s Rheo Knee and Rheo Knee XC).

The following video describes yet another MIT prototype, this one being used in conjunction with MIT’s new AMI technology. The point of interest in this video begins at the 6:00 minute mark:

Note that the method used here to relay the sensory feedback to the brain is through electrical stimulation of the skin, not through vibrators or surgically implanted electrodes.

Normally, having electrodes surgically implanted in your residual limb to directly interface with your nerves (i.e. a true neural interface) not only involves the typical risks of surgery; there is also the possibility that scar tissue will form between the electrodes and their target nerves, eventually degrading the connection over time.

However, when you combine osseointegration with a neural implant, you can at least discount the typical risks since you are having surgery anyways.

Note, the use of this system for lower limbs is just now undergoing a multi-year clinical evaluation that won’t be formally completed until January 2023, so commercialization is still a few years away.

Sensory feedback is only one aspect of a deeper connection between a bionic limb and its user. To get the whole picture, see Understanding Bionic Touch.