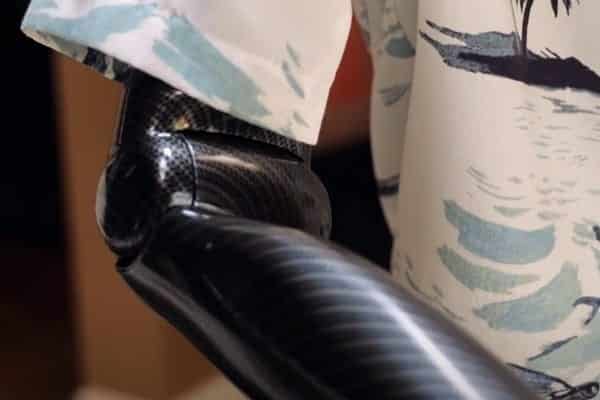 Steeper’s Espire Elbow comes in five different models. Two of these — the Espire Pro and Espire Hybrid — are compatible with bionic hands.

A Quick Look at the Espire Elbow

The Espire Pro is an electric elbow with the ability to control the elbow itself, a bionic wrist, and a bionic hand or another bionic terminal device. This can be accomplished using the Espire’s built-in control system or a pattern recognition system like Coapt Engineering’s Gen2 or Infinite Biomedical Technologies’ Sense.

The Espire Hybrid elbow provides the same ability to control bionic components but it does not offer an electric elbow. That is, you cannot lift an object by curling the arm at the elbow. Instead, you can electronically lock the elbow in place so that you can lift objects passively.

The following short video provides a basic description of the Espire and its different models. It also announces Steeper Group’s acquisition of the Espire line of devices from its original designer, College Park Industries. We do not believe that this acquisition will have much impact on consumers because both companies are well established in the prosthetics industry.

The Espire Hybrid allows users to electronically lock the elbow but requires them to manually position it. It also employs an adjustable counterbalance system to counteract the forces of gravity when the elbow is not locked.

Both models allow for electric control of a wrist rotator and bionic hand or another bionic terminal device.

One of the most exciting features for those using myoelectric control is the ability to recalibrate that system “on the fly”. This is accomplished by pressing a reset button on the Espire and then following a simple calibration routine. We view this as a wonderful addition to the world of electric elbows.

The Espire Pro offers proportional speed control for the elbow.

Both the Pro and Hybrid models support proportional speed control for all other bionic components.

The Espire Pro and Espire Hybrid can both be paired with one of several mechanical or electric wrist rotators.

The Espire Pro can actively lift up to 4.5 kilograms by curling at the elbow. Both the Pro and the Hybrid models have a static holding capacity (i.e. with the elbow locked) of 11.3 kilograms.

The Espire’s User Guide specifically cautions against subjecting the elbow to mechanical overloading, such as impacts or vibration. It also cautions against unusual activities that “include, for example, sports with excessive strain and/or shocks to the wrist joint (pushups, downhill mountain biking, etc.) or extreme sports (free climbing, paragliding, etc.)”.

In our view, it is best to view all electric elbows as relatively fragile.

The Espire has an IP rating of 22. This means that it is protected from water spray less than 15 degrees from vertical, and from objects greater than 12 millimeters (the average dust particle is smaller than 1 millimeter).

Put more plainly, the Espire is neither waterproof nor dustproof.

The Espire comes with two interchangeable batteries. One battery should be sufficient to power the elbow, a wrist rotator, and a bionic hand or another terminal device for a full day with average use. The second battery is typically used as a backup.

Each battery requires 3.5 hours to fully charge if completely drained.

The Espire does not offer user software. However, it does offer a software application called the Espire Hub App for prosthetists to configure the Espire :

We do not yet have reliable information on the price for a typical solution involving either the Espire Pro or the Espire Hybrid.

If you have this information, please convey it to us through our contact form.

The Espire comes with a standard 24-month manufacturer’s warranty. Users can purchase an additional two years of coverage.

The following comments are from clinicians with extensive experience with the Espire Elbow:

We have used this elbow on 6 patients this past year and it is a well-designed and programmed elbow. We have utilized control with a standard 2-site myoelectric system, an in-line linear transducer, and pattern recognition. It has a very sleek and cosmetic style, but the batteries need to be removed to be charged, which offers extended battery life but can also be difficult for the patient to change and charge. The weight of the device is very close to the elbow center, which gives the device a perceived lightness to the patient. The programming for the prosthetist is quite simple as we are able to complete it on an IPad. The programming also allows us to swap inputs for control and control mechanisms. A feature I do not like about the elbow is that it does not have a free swing mode, which makes it look less natural during walking. Overall a great product, but not much of change to existing elbow technology.

Are you or have you previously been an Espire Elbow user? If so, please share your insights with others looking at the Espire as a possible component in an above-the-elbow solution.

We do not yet have a sufficient number of survey participants to publish fair and accurate results for the Espire Elbow.

Considerations Before Buying the Espire Elbow

Without sufficient user feedback on the Espire, it is difficult for us to draw any conclusions about it.

However, we do wish to observe that this is the first entirely new electric elbow in some time, and it appears to have benefitted from modern components and design techniques. It also offers built-in myoelectric recalibration — a feature not offered by its competitors.

In our view, this suggests that the Espire should go on your shortlist if you are shopping for an electric elbow.