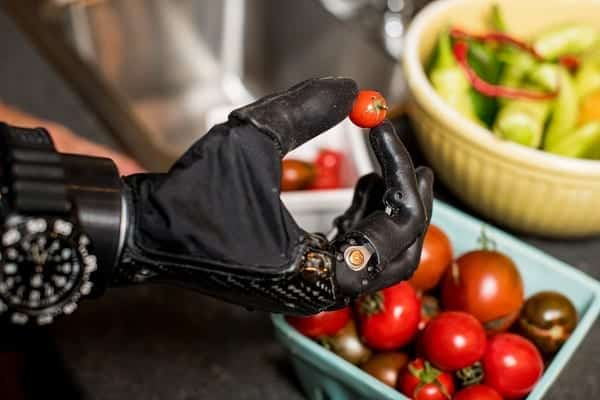 The Psyonic Ability Hand is a multifunction myoelectric hand with six degrees of freedom, sensory feedback, and fast response times. It’s also strong and rugged, with compliant, damage-resistant fingers and a lift capacity of 23 kg (50 lbs). The Ability Hand has been designed to work with most third-party sensor systems, and is compatible with most third-party elbows and wrist rotators.

A Quick Look at The Ability Hand

Like many young companies, Psyonic doesn’t yet make a lot of slick marketing videos. The daily demands of being a growing business likely draw their attention elsewhere. We’re therefore going to start with this older video of the Ability Hand in its late prototype stage, mainly because it does a good job of describing the hand’s key features:

However, just so we don’t give you the wrong impression of the hand’s commercial finish/appearance, you should also look at the one slick marketing video that Psyonic has produced:

The Ability Hand offers five grip patterns. This may seem low compared to hands like Ottobock’s bebionic Hand, with 14 grip patterns, and Ossur’s i-Limb Quantum, with up to 36 patterns. However, research has proven that users typically use only a few core grips. What’s more important is how well a bionic hand performs these core grips, which is a function of its myoelectric sensors, control system, and its electromechanics.

The Ability Hand is compatible with most third-party sensor systems, meaning it works just as well with traditional dual-site sensors as it does with myoelectric pattern recognition. This allows a prosthetist to choose the best sensing system for the user.

The Ability Hand is a new entry to the myoelectric hand market (September 2019), so we do not yet have sufficient video to study the hand’s control system, i.e. its dexterity while performing specific tasks like meal preparation or tying shoelaces. But the Ability Hand does have two features that contribute to improved dexterity: sensory feedback and superior closing speed. We elaborate on both these features below.

The Ability Hand’s thumb automatically positions itself based on the selected grip.

At the time of this writing, the Ability Hand is the first commercial bionic hand with sensory feedback. Sensors in the fingertips trigger vibrations in the residual limb that tell the user when they have come into contact with an object and how much pressure they are applying to it.

In this video, the user picks up a fragile egg shell while blindfolded:

How important is this? We frequently use our natural hands by glancing at something, reaching for it, and then passing the operation off to our sense of touch. Try picking up a pen or a utensil and see how intuitively you move it into the correct position after looking away from it.

Imagine how mentally taxing it would be if you had to visually guide every minor detail of such actions.

That’s a key difference between the Ability Hand and its competition. This difference is further amplified by…

The Ability Hand is fast. It can close its fingers in 200 milliseconds, allowing it to do this:

We’ve not seen another bionic hand perform a similar feat.

Why is this important? With most bionic hands, you not only have to visually guide the hand through the minutiae of each movement. You also have to perform actions more slowly than you would naturally.

All of this increases the mental load on the user.

With its sensory feedback and fast closing speed, the Ability Hand has significantly reduced that mental load, further bridging the gap between bionic and natural hand functions.

As for grip force, we do not yet have any data on this.

At one time or another, most of us have temporarily lost the function of our fingers, hand, and/or arm due to injury. We all know how inconvenient this can be.

It is no different for someone who relies on a bionic hand. Having fingers or the entire hand break is a major inconvenience, especially if the hand must be left in the repair shop for a few days.

The Ability Hand’s fingers are made of polyurethane and silicone. This makes them compliant, allowing them to sustain up to 10x the blunt force impact of rigid fingers.

Because the Ability Hand is new to the market, we do not yet have any user feedback on durability.

According to Psyonic, the estimated final net price to the end-user for a typical solution involving the Ability Hand is $15,000 to $20,000 USD. This includes typical costs for sensors, socket, and prosthetist fees.

Note our multiple uses of the word “typical” in the preceding paragraph. There can be substantial differences between individual patients, especially with respect to residual limbs. So please use our pricing information as a general guide only.

To see how the Ability Hand’s price compares to its competitors, please see our Bionic Hand Price List.

One of the great joys of researching the human bionics industry are the number of passionate scientists and engineers we encounter. As our post on Master Innovators in Bionic Limbs describes, legends like Hugh Herr and Dean Kamen poignantly remind us that this is not about money. This is about restoring lost abilities to our fellow human beings.

Psyonic’s CEO and co-founder seems to be cut from the same cloth. As he states in this video early in the Ability Hand’s development, he is very much focused on making bionics affordable for the masses.

He repeats this message quite frequently, even while wrestling with the realities of distribution, insurance requirements, and government regulations, etc.

As this message is consistent with our mandate at BionicsForEveryone.com, we intend to follow Psyonic’s growth and its technical advancements very closely.

Considerations Before Buying the Ability Hand

First and foremost, the Ability Hand has only become commercially available since September, 2019, so taking it for a good test run is probably prudent.

As for how the hand stacks up against the competition, that’s difficult to say right now. Its focus on core grips, sensory feedback, and hand speed is intriguing. Sensory feedback, in particular, has the potential to make hand more intuitive than other myoelectric hands.