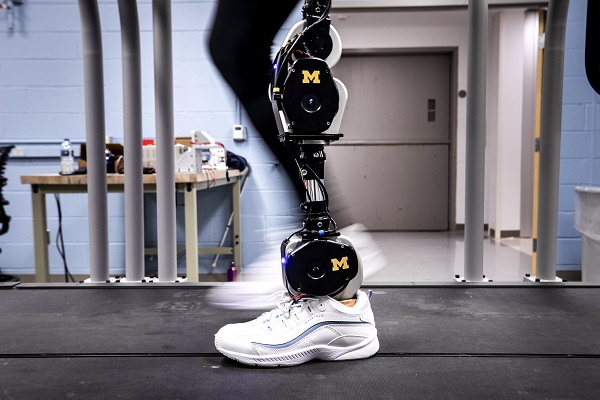 One of our favorite research initiatives in lower-limb bionics in recent years has been the Open Source Leg project developed by the University of Michigan (UOM). While most current commercial bionic knees and ankles/feet evolved from entirely proprietary technologies, UOM has been helping a new generation of researchers share knowledge and technology. Here’s a quick glimpse of what they’ve been up to:

To be clear, this bionic leg is not intended as an end-user commercial device. It’s a device designed primarily to give researchers a common platform to develop improved bionic leg control systems. And until the partnership with Humotech, which we’ll describe shortly, it wasn’t even available as a physical device. Instead, it was a list of parts and instructions that researchers could use to build their own physical device.

Still, the advantages of this approach are clear. It allows research labs to assemble a development and testing platform at a fraction of what it would cost to do so from scratch. Also, because the resulting devices are the same, solutions developed in one lab can be tested and improved in another.

Even before the agreement with Humotech, over 10 research groups were already using this technology.

The New Partnership Between UOM and Humotech

What’s better than using specifications to build your own standardized development and test device? Buying one off the shelf!

That’s essentially UOM’s agreement with Humotech. Humotech will provide an assembled version of the open-source leg, complete with warranty service and technical support. They will also further build and support a development community around the open-source leg.

Here’s a more complete description of the project:

When Humotech asked us to share this announcement with our audience, we gladly agreed. Nearly 10 % of our readership consists of scientists and engineers (much to our surprise), so we’re happy to spread the word!

But we’re also huge fans of the initiative itself. One of the big problems in lower-limb bionics right now is the slow pace of development and, frankly, a lack of competition. Every week, lower-limb amputees write us to ask if there are any new bionic knees of ankles/feet on the horizon, or how long it will take before we start seeing the prices for lower-limb bionics drop like they have for upper-limb bionics. And, every week, we have to give the same disappointing answer about waiting for more startups to emerge.

Well, the first link in that chain is increased academic research. There is no better proof of this than all the new bionic hand startups being launched by recent research graduates around the world.

If this partnership between UOM and Hmotech helps accelerate research, we’re all for it.

For more information on this project, see the contact information at the bottom of this press release.

For a list of all bionic lower limbs currently on the market, see Current Options for Bionic Legs.

For a complete description of all current lower-limb technologies, devices, and research, see Our Complete Guide to Bionic Legs and Feet.