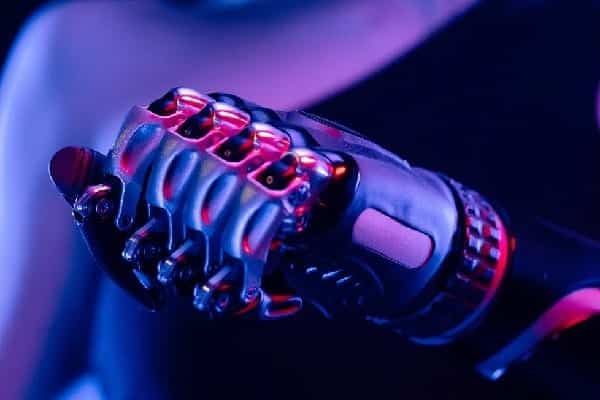 As our list of Current Options for Bionic Hands shows, we are currently covering 14 bionic hands that are either a) already available in western countries, or b) soon will be.

What astounds us is the number of new bionic hands now in development all over the world. Some, in places such as China and India, have such large local customer bases that it may be a while before they are offered for sale in the West. But these devices are just as important to amputees because:

Because of this, we are going to write full articles on the following bionic hands over the coming months and then fully incorporate them in all relevant articles & lists. Consider this your sneak preview!

Esper Bionics, with offices in Kyiv, Ukraine and New York City is one of the more interesting startups that we’ve encountered. They’re still in the trial phase and won’t begin selling bionic hands in the U.S. until later in 2021, but they obviously have a high-functioning prototype.

What impressed us the most in chatting with their CEO, Dmytro Gazda, is how forward-thinking they are. They envision a world in which the artificial intelligence component of an Esper Hand is at least partly in the cloud, constantly learning, evolving, and updating participating devices the same way that smartphones do.

Don’t quote us on that description. It’s from an informal chat with Dmytro from a few months ago. We’ll dig much deeper into these subjects when we write our full article on the Esper Hand later in the summer of 2021.

BionIT Labs, an Italian company, is another impressive startup with a strong emphasis on artificial intelligence. In their case, they plan to do away with grip patterns altogether (and thus the need to switch between different grips). Instead, users need only worry about opening and closing the hand. The hand then automatically adjusts its grip to match the shape and size of the object being grasped.

Naturally, we have a lot of questions about this approach. But they’ll have to wait until we write the full article on Adam’s Hand over the next few months.

Human Assistive Technologies (HAT), a Mexican-based company, is another startup that now has our complete attention. We’ve known about them for over a year and have caught a few glimpses of their groundbreaking work, but so much of the detailed information has been in Spanish (our limitation, not theirs) that we haven’t been able to piece together the full vision

Well, that’s changed. With the release of a few recent videos, we finally have a good sense of where they are headed, and we love it! Now that things are so far along, we’ll attempt to write a detailed article on the C-Hand as soon as possible.

The first of what we expect to be many new bionic hands from India. There doesn’t appear to be anything revolutionary here in terms of artificial intelligence — at least that’s not their emphasis in early advertising material. But the engineering and appearance of this device look remarkably polished. And we suspect, given their primary market and focus on affordability, that this may be one of the new devices that will eventually put pricing pressure on premium western hands. We’ll know more after we interview them for our main article.

We don’t have a lot of detailed information about this Russian bionic hand because we need to obtain English copies of its User Guide and Clinician’s Guide as our typical next step in the review process. But, based on the specifications and the video clips that we’ve seen, this is yet another serious contender in the bionic hand market. And that’s the point of this article because it goes to show just how much innovation is going on outside our western bubble.

Chinese company OYMotion hasn’t yet produced slick marketing videos like those of the preceding devices, but don’t let this fool you. Having reviewed scores of bionic limb devices by dozens of companies, we immediately recognized the corporate personality at work here. This is an engineering company, more focused on function at the moment than western-style promotion. But having just watched 38 of their videos and gone over the manuals they sent us, there is some rock-solid stuff here — enough to make us look forward to writing our full-length article on the OHand in a few weeks.

Mand.ro is a South Korean company that also has an office in Jordan. Like some of the other companies/hands near the bottom of this list, they haven’t perfected their marketing materials just yet. But if you look closely at how efficiently the Mand.ro Hand navigates this Cybathalon 2020 Arm Race course, you can see that it is clearly a very capable device. And with an emphasis on affordability, it may be one of the new bionic hands that puts more downward pressure on bionic hand prices.

Our second entry from India appears to be a step behind their counterparts from Makers Hive when it comes to marketing, but, again, this can be deceiving. Grippy is already selling and distributing their bionic hand through P & O clinics in India. Sometimes, startups like Robo Bionics (launched 2016) tend to focus on their ground game in their first few years of operation. It is only after perfecting their technology, distribution, and customer support systems that they then turn their attention to marketing. But we see enough here to keep our eye on Grippy going forward.

Other companies around the world are on their way to joining the preceding group. These include:

If you are a company that belongs in this article but we’ve missed you, please let us know through our Contact Form.

Every time we write an article like this on upper-limb bionics, we rightfully get asked why we don’t write more about lower-limb bionics.

The simple truth is that there is currently a lot more development activity in the upper-limb market, driven partly by the fact that small companies can produce complete solutions using 3D printing.

This same revolution hasn’t yet taken hold in the lower-limb market. Rest assured, however, that we are scouring the globe for new lower-limb bionic devices and will write an article on what we find within the next week or so.