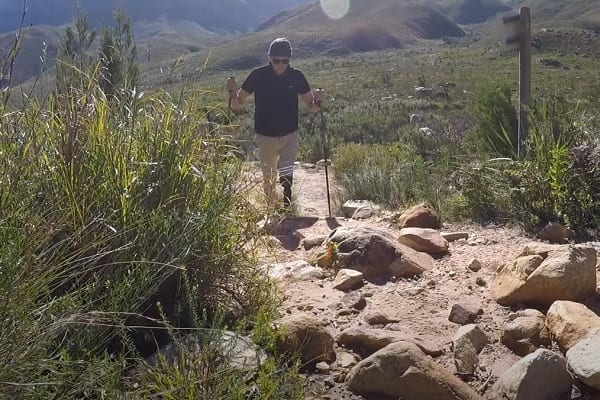 Ossur’s Rheo Knee XC is the premium version of its sister product, the Rheo Knee. Added features include the ability to transition more quickly from walking to running and from walking to bicycling. Users can also ascend stairs step-over-step and navigate obstacles with more stability and safety.

A Quick Look at the Rheo Knee XC

The following video is interesting because it not only shows many of the advanced features of the Rheo Knee XC; it also provides a glimpse of the rehab journey when using the XC:

Regardless of one’s preference for different companies/technologies, it is always inspiring to see someone go from a wheelchair to being so mobile.

This next video shows a very experienced prosthetic user (Chris Olivier) testing his Rheo Knee XC on a rugged mountain hike after only one week of use. Watch from 06:00 to 09:00 for the most relevant section:

That Chris would trust a new device on such a challenging hike speaks volumes about the XC’s added stability/security. However, before attempting extreme outings like this with your bionic knee, we do urge you to spend a bit of time on Chris’s YouTube channel at The Amped Life with Chris, where he provides a lot of great advice.

In a hydraulic knee, the hydraulic fluid must be pushed from one chamber to another to increase or decrease resistance. This takes longer than using an electromagnetic field and explains why the Rheo Knee XC responds more quickly than its hydraulic competitors.

There is also a lower limit to hydraulic resistance so even if the user wants the knee to swing freely (e.g. when walking very fast), the hydraulics will still cause a bit of drag and a slight delay.

In contrast, an MRF knee can quickly reduce its electromagnetic field to nearly zero, essentially eliminating all resistance.

For the true techies among you, here is a diagram of the difference between the XC’s MRF technology versus the hydraulic system used in Ottobock’s C-Leg:

The Rheo Knee XC addresses most of these issues but it does not actively manage the Swing Phase after release from the Stance Phase. Instead, it becomes a free-swinging knee until the foot touches down again and reactivates the electromagnetic field to generate resistance and provide support.

During the Swing Phase, it is up to the user to ensure proper foot clearance to avoid tripping.

Benefits and Drawbacks of the Rheo Knee

The primary benefits of the Rheo Knee are the same as for any bionic knee. The sensors detect the current position/situation for the prosthetic leg and the microprocessor automatically compensates for things like:

The biggest benefit specific to the Rheo Knee is its free-swinging nature, which makes it more fluid and quicker to respond to the movement of the residual limb. This, in turn, reduces the user’s energy consumption, as described by this user:

The biggest drawback is that if users do not have good control over their residual limb (typically K2 or lower K3 users), there is a greater chance of failing to attain sufficient foot clearance during the Swing Phase, which increases the risk of stumbling/falling.

The primary benefits of the XC model versus the base Rheo Knee are the ability to:

We have attempted but have so far been unable to determine exactly how the Rheo Knee XC has achieved these improvements. Based on the identical physical specifications, the improvements appear to be software related or possibly based on some kind of enhancement to the electronics. We have submitted this question to Ossur and will update this section as soon as we receive an answer.

As is the case with most companies that make both bionic knees and prosthetic feet, the Rheo Knee is best paired with Ossur feet. This includes Ossur’s bionic Proprio Foot as well as the company’s pure carbon fiber K3 feet.

For high-impact activities, the Rheo Knee XC can also be paired with Ossur’s Re-Flex Shock foot.

The Rheo Knee XC’s battery can last for between 48-72 hours of continuous use, depending on the level of activity.

As with most bionic limbs, it is best to charge the XC’s battery each night.

The Rheo Knee XC has an IP rating of 34, meaning it is protected from occasional water splashing from any angle but it cannot be submerged. It is not corrosion resistant and should not be exposed to salt or chlorinated water.

The knee should also not come into contact with sand or be used in a dusty environment because it lacks protection against particles smaller than 2.5 mm.

The Rheo Knee XC weighs 1.6 kilograms. The maximum allowable user weight for the knee is 136 kilograms.

The added capabilities of the Rheo Knee XC shift the target user group toward the high K3 to low K4 activity levels.

The Rheo Knee XC is supported by software called the Ossur Logic App, which is available for IOS and Android devices.

For users, this application provides view-only capabilities including step count and battery charge level, as well as functional training exercises.

Operating in Expert Mode, trained clinicians can use the application to change the knee’s settings.

Ossur offers a full three-year warranty on the Rheo Knee XC including any repair costs due to defects.

The warranty can be extended to five years at the user’s option. Under this option, the knee must be subjected to a mandatory inspection between 36 and 40 months after purchase.

According to our information, the Rheo Knee XC typically sells for between $60,000 and $70,000 US including the socket, prosthetic foot, and all prosthetist fees.

The biggest consideration before buying any version of the Rheo Knee is whether you are sufficiently active (mid-to-high K3, low K4 user) to benefit from the Rheo’s MRF technology without incurring the increased risk of tripping if you are not.

The choice between the Rheo Knee XC versus its base model depends on whether you can and will take advantage of the XC’s added high-activity capabilities for running, biking, etc. If not, the increased cost of $10,000 US is likely not worth it.

There is also a question of compatibility. A knee that uses MRF will feel different than a hydraulic knee. Will that difference be better or worse for you? Because that’s entirely dependent on your personal circumstances/preferences, we strongly suggest that you test at least one hydraulic knee, such as the Ottobock’s Genium, before purchasing a Rheo Knee XC (and vice-versa).