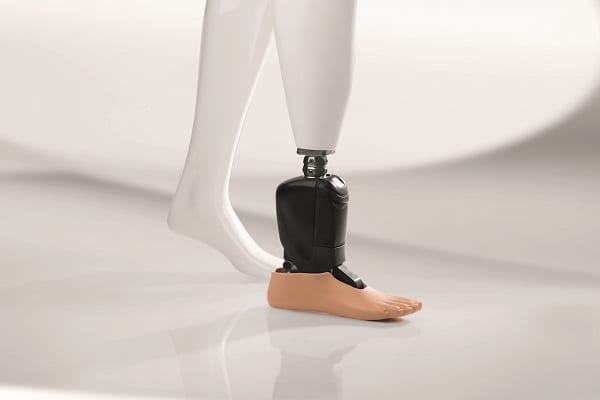 Ottobock’s Empower Ankle is a unique bionic ankle/foot that provides propulsive power in addition to automatically adjusting foot position and resistance. This essentially replaces the function of muscles and tendons lost to surgery, resulting in a more natural gait, increased walking speed and efficiency, and less fatigue.

A Quick Look at the Empower Ankle

There is no better example of the unique benefits of the Empower Ankle than the following video of a double amputee walking, then running, up and down stairs.

In our opinion, this is astonishing. Imagine showing this to double amputees at the turn of the century and telling them that this was only a decade or two away!

The reported ROM for the Empower Ankle is 22 degrees plantar flexion. Dorsiflexion is entirely dependent on the foot component’s carbon spring.

We know that the Empower Ankle automatically adjusts its foot stiffness in the heel strike portion of the Stance Phase. This ensures optimum shock absorption and foot loading.

We also know that it adjusts its power generation during the remaining portion of the Stance Phase until push off.

And we think that it adjusts the foot angle in the Swing Phase of the gait cycle, i.e. while the foot is in the air.

All of this would typically lead us to declare that the Empower uses both a within-step and inter-step adjustment strategy. We just haven’t been able to find that explicitly stated anywhere.

Nonetheless, with two microprocessors, six environmental sensors, and the ability to make thousands of adjustments per second, we are confident in stating that an Empower Ankle will automatically adjust to any terrain, as needed.

The Empower Ankle is the only bionic ankle/foot to offer a powered push-off feature, meaning it is the only one to provide net positive energy when walking. This occurs at the end of the Stance Phase and is especially beneficial to users when ascending stairs, ramps, and hills.

All other bionic ankles/feet rely on a carbon fiber foot to mechanically store and release energy. But this still results in a net energy loss because only part of the expended energy can be stored and reused with each step.

Note that Empower does not provide any push off when descending stairs, ramps, or hills.

The lithium-polymer battery used to power the Empower Ankle is generally good for eight hours of use, depending on the level of activity.

The Empower Ankle is not waterproof, but all of its components are weather-sealed, meaning it is sufficiently resistant to rain, snow, and dirt for everyday use.

The Empower Ankle weighs approximately 1,928 grams without a footshell, and 2,200 grams with one. This makes the Empower the heaviest of all bionic ankles/feet, approximately 700 grams heavier than its nearest competitor.

However, this is not a fair comparison. Users are required to lift other bionic ankles/feet with their own muscle power, whereas the Empower Ankle provides added push-off via an electrical power system.

The best way to determine how these two factors offset is to examine the net impact of the Empower Ankle’s use on its wearer. In clinical studies, patients using an Empower Ankle were able to increase walking speed, reduce fatigue, and reduce the stress on other joints. This suggests that the added weight is not a problem.

The minimum user weight for the Empower Ankle is between 68 kg and 77 kg. The maximum weight is 130 kg.

The Empower Ankle is rated for K3 and K4 use.

There is no user software for the Empower Ankle. Instead, software and a tablet are provided to each clinic with their first order. The clinic’s technicians can then customize the ankle for each user.

Note, there is no adjustable heel height or standing stop available for the Empower.

The warranty can be extended to six years at the option of the user.

The best price estimate that we have for the Empower Ankle is $40,000 to $50,000 US inclusive of all clinical fees. This figure comes straight from its inventor, Hugh Herr, in a September 2020 interview.

Unfortunately, Mr. Herr also pointed out that there is still no reimbursement support for this extraordinary device from the Centers for Medicare & Medicaid Services (CMS). This means that only current or former members of the military, or those covered by the US Department of Labor’s Office of Worker’s Compensation Programs (OWCP), generally have access to the Empower.

To see how the price of the Empower compares to its competitors, please see our Bionic Foot Price List.

The Empower Ankle has been approved for use with the C-Leg, Genium, and X3 bionic knees — all Ottobock devices.

Considerations Before Buying an Empower Ankle

From our standpoint, based especially on the video evidence of how easily users ascend stairs, ramps, and hills, the Empower Ankle seems to be the ultimate bionic ankle/foot for active users.

In fact, it would not surprise us if, within a decade or two, all bionic ankles/feet offered power augmentation.

The problem is the Empower’s high price or, more specifically, the lack of public and private insurance coverage for it.