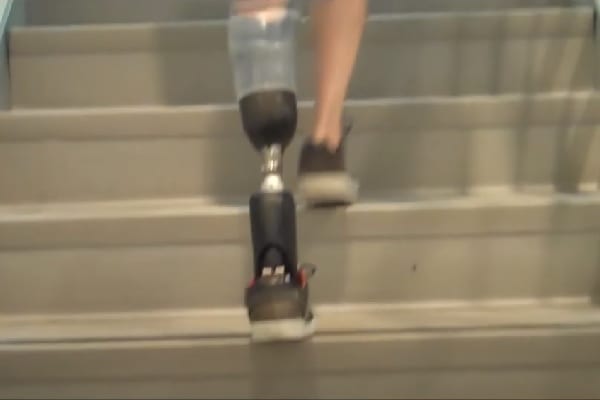 A few decades ago, going up and down the stairs was an ordeal for lower-limb amputees, even dangerous. These five short videos show how bionic knees and ankles have made this important daily task so much easier!

Very smooth descent using the bionic Freedom Kinnex foot/ankle from Proteor USA. Going up the stairs isn’t quite as smooth, but don’t worry, nothing a little electrical propulsion won’t fix…

This powered bionic ankle makes going up and down the stairs so smooth, it’s difficult to tell it apart from a natural gait. Originally the brainchild of MIT professor Hugh Herr, it is now the Empower Ankle from Ottobock.

This is frankly incredible. Using two Empower Ankles, this bilateral amputee can run up and down stairs faster than the so-called able-bodied author of this article. Actually, he could probably whup me in many things!

This video features the Rheo Knee from Ossur. This isn’t quite as smooth as the videos for the Empower Ankle, but keep in mind that going up the stairs for an above-the-knee amputee is quite a bit more difficult than for below-the-knee amputees.

To us, this is the most incredible video of all. For a bilateral above-the-knee amputee, going up and down the stairs without bionic assistance can be quite difficult. Here, a pair of Genium bionic knees from Ottobock greatly simplifies the task.

Before we continue with this article, we would like to give a tip of the hat to all the scientists, engineers, and fearless amputee testers who made these technologies possible. Bionics has indeed conquered the stairs!

However, we would be remiss if we didn’t point out that there are far too many people in the world who don’t have access to this advanced technology, mainly because they lack the money to pay for it.

The bilateral above-the-knee amputee in this next video is trying to climb a substantial set of stairs without bionic legs. He clearly has all the guts, determination, and perseverance that he needs to tackle life with his limb difference. So why force him and many others to struggle like this?

Of course, not every lower-limb amputee is a physical candidate for bionic limbs. But that merely raises another question about this video. Where the hell are the accessibility lifts in a public transit station in a wealthy country like Canada?