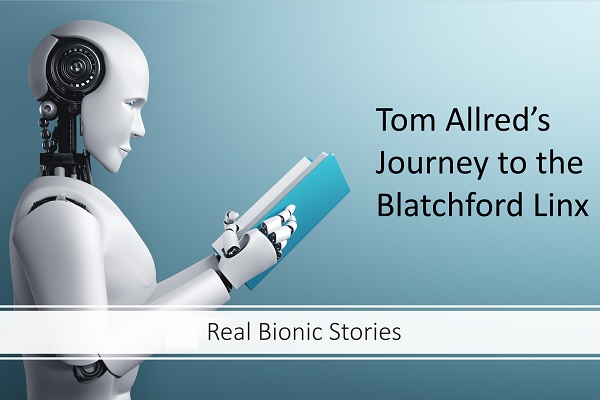 In this series of articles, I talk to users who have made the transition to bionic limbs. We discuss their journey, the problems they encountered along the way, and the ingredients that ultimately led to their success. In doing this, I hope that others can learn from their experiences — Wayne Williams.

Since starting BionicsForEveryone.com, I have been constantly amazed at the resilience, determination, and adaptability exhibited by many amputees.

At 72 years of age, Tom Allred exemplifies all of these traits. Despite having severe mobility problems since birth and ultimately becoming a bilateral above-the-knee amputee at age 12, he has successfully fought his way through every obstacle placed in front of him. Here is the beginning of his story:

As you can probably tell from this introductory video, Tom is a natural storyteller. To be honest, I spent more time as a captivated listener than I did as an interviewer. But the main point here is that he truly embraced his prostheses from the moment of his amputations. For him, they were a release from the severe restrictions placed on him by his dysfunctional knees. Here is just a small example of some of the activities that he’s pursued since becoming an amputee:

In this next video, Tom discusses some of his earliest prostheses. In these early days, before technology began to play a bigger role, he credits his “just do it” attitude as one of the main factors in his success:

I found Tom’s stories in this video very educational. I especially like how he is able to identify the specific benefits that he enjoyed first with the Orion Knee and then with the Elan Foot/Ankle.

But, of course, these were mere stepping stones to the fully integrated Blatchford Linx.

The Transition to the Linx

Anyone considering the Blatchford Linx should probably listen to this video and the preceding one a second time. There is nothing like the voice of experience!

A Final Few Words of Wisdom from Tom’s Prosthetic Journey

After more than an hour of talking with Tom (i.e. pre-edit), I asked him for a little advice for younger amputees still looking for their perfect prosthesis. Here is what he had to say:

Well, that’s it for the interview portion of this article. We found it incredibly interesting to talk with Tom. Personally, if I was a lower-limb amputee who hadn’t found the right prosthetic setup yet, I’d go out of my way to talk to him.

Fortunately, he makes that pretty easy through his Amputee Nomad website.

For a list of all lower-limb bionic devices, see Current Options for Bionic Legs.