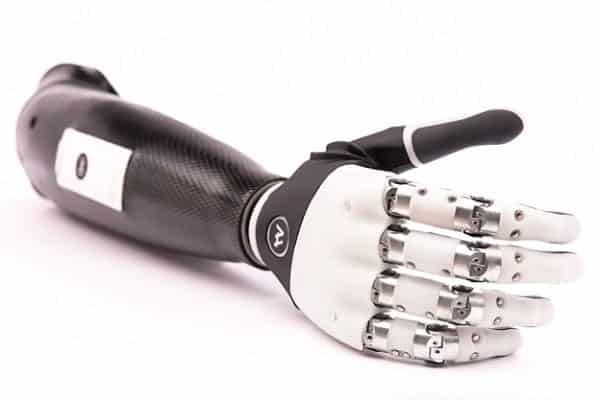 Adam’s Hand is one of the most intriguing new bionic hands due to its unique adaptive grip technology, which eliminates the need to change grips.

A Quick Look at Adam’s Hand

The following video provides a brief description of the key features of Adam’s Hand:

We will describe each of these features and a few others in more detail in subsequent sections.

This is by far the most distinguishing feature of Adam’s Hand. It does not use grip patterns, at least from the user’s standpoint. It uses a fully adaptive grip where the hand’s digits automatically wrap around an object as needed.

Other hands also use adaptive grips, mainly through a method of finger stalling, i.e. each finger involved in a grip pattern continues to close until it encounters resistance. But this feature is merely intended to augment the grip pattern that has been explicitly selected by the user.

Adam’s Hand uses its adaptive grip as its primary means of grasping objects. Users do not have to switch grips before grasping an object. They merely position the hand and trigger the close command, letting the hand and its software do the rest. Here are a few examples:

There are multiple advantages to this approach:

We asked BionIT about tasks that do not fit this model, such as typing on a keyboard. Their answer is that the user simply needs to close the hand while keeping the index finger extended, either by using the other hand or any hard surface, thus creating the pointer grip used by most bionic hands for typing.

For objects that involve a trigger, the hand has been designed to ensure that the index finger always opens or closes first.

These nuances suggest that the company has gone beyond the novel idea of a fully adaptive grip and put considerable thought into other aspects of the hand’s design.

As with most other myoelectric hands, Adam’s Hand offers proportional speed control. This means that the hand will close with a speed and force that correlates to the strength of the muscle action used to trigger the close signal.

Adam’s Hand uses a pressure sensor in the thumb to detect if an object is slipping from the hand’s grasp. If so, the hand will automatically increase the grip force.

Adam’s Hand offers vibrotactile feedback through a vibration motor placed into the hand. It can provide feedback on both the inputs from the pressure sensor in the thumb as well as the speed and power of the grip.

Adam’s Hand comes with an industry-standard Quick Disconnect Wrist. This allows users to quickly swap the hand for another device, such as an Electric Terminal Device (ETD).

Adam’s Hand can carry 20 kilograms of a static load and can exert 100 Newtons of force, which is about the middle of the pack for the bionic hand industry. Note that an average of 70 Newtons is required for most daily activities.

The company also noted that because their adaptive grip automatically distributes the grip force of each finger where and when it is needed, and then instantly adjusts this grip force if the grasped object begins to move, less force is needed when compared to traditional, non-adaptive bionic devices.

We are intrigued by this claim and look forward to the feedback that we will eventually receive through our User Satisfaction Survey for this device.

The company claims that its adaptive grip is also responsive to external stress. However, in keeping with our policy for all bionic hands, we will rely on our User Satisfaction Survey to measure durability. Since Adam’s Hand has not yet launched commercially, it will likely be a few years before we have those results.

One durability feature that we unequivocally support is that if the fingers do break, they have been designed for easy replacement by a prosthetist, so the hand will not have to be sent back to the manufacturer for this type of repair. Considering the inconvenience caused to users who have to wait weeks or even months for repairs to their bionic hands, this is a feature that other companies should emulate.

IP44 also means that the hand is protected against water splashing from any angle but it is not waterproof. Truly waterproof hands include the TASKA Hand, the Vincent Evolution, and, starting in 2024, the Atom Touch.

BionIT Labs is currently developing a durable aesthetic glove that can be used by patients who want a more life-like appearance. It will also raise the hand’s IP rating to 67, giving it the same IP rating as other dustproof and waterproof hands.

We will update this section as soon as the glove is officially launched.

Adam’s Hand comes with BionIT Labs’ proprietary ThunderCell Battery, which lasts for at least one day of typical use and can be charged in only one hour. Users can also purchase additional batteries, which they can swap into the hand as needed.

While the ThunderCell Battery is proprietary, it has already been used successfully with other devices, in some cases lasting multiple days before requiring a recharge.

The company also offers an end-user version of the software called simply “MyoLogic App” (i.e. without the “Pro”). A video of this version of the app is forthcoming.

In either case, the app can use pattern-recognition technology with just two electrodes thanks to a fast calibration procedure (15 seconds) that does not rely on threshold, as happens with standard direct-control systems. It instead learns the combination of the two muscle signals (forearm flexors and extensors) used to open or close the hand. This allows for more robust control even when the user’s forearm is in non-standard positions (e.g. above the head or behind the shoulder).

Both versions of the app are available for both IOS and Android devices.

Adam’s Hand is designed as a true component hand. Therefore, the company expects it to be compatible with all commercial bionic elbows, wrists, etc. However, they have not yet conducted full compatibility tests. We will update this section as soon as they have done so.

Adam’s Hand is still in its trial phase. According to BionIT Labs, the hand will first be released for sale in Q1 2022 in Italy, and later in 2022 in Germany, France, Spain, and the U.S., though the official timeline for these countries won’t be confirmed until later in 2021.

Adam’s Hand comes with a 3-year basic warranty with the option to extend it up to 3 more years (for a total of 6 years). This warranty includes free check-ups in the 24th and 48th months. The ThunderCell Battery and the Wave Electrodes come with a 1-year basic warranty that cannot be extended.

Are you currently using Adam’s Hand or have you used it in the past?

We do not yet have a sufficient number of survey participants to publish fair and accurate results for Adam’s Hand.

Considerations Before Buying an Adam’s Hand

Clearly, the crux of this device is whether its advanced and unique version of a fully adaptive grip works in a high percentage of daily activities. If it does, it’s a significant advance over traditional bionic hands. If not, it will likely not fare well in the market.

Beyond this, we have no official opinion of Adam’s Hand and are unlikely to form one until it’s been on the market for a few years and we get feedback from a sufficient number of end-users.