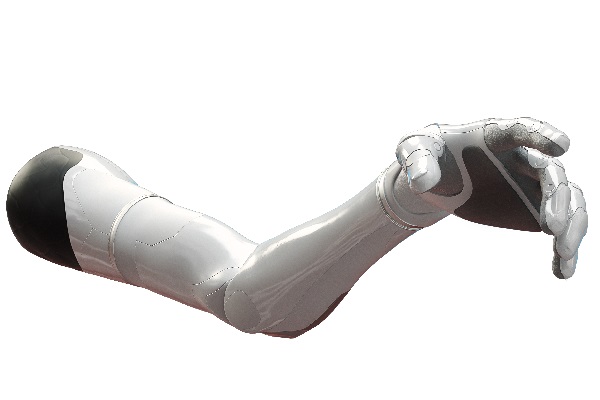 Now targeting a launch date in 2023, the Atom Touch will be the most advanced bionic arm/hand in the world.

A Quick Look at the Atom Touch

Atom Limbs has not yet released any videos to demonstrate the functionality of the Atom Touch but it has released this video that provides a 360-degree view of its intended appearance:

For a video clip of the Touch’s functionality, we have to rely on its predecessor, the MPL, toward its later stages of development:

For the feature descriptions that follow, please note that some are incomplete mainly because the Touch is still in development. However, we are in periodic communication with the company that makes the Touch (Atom Limbs) and will update this article whenever new information becomes available.

Atom Limbs is promising near-natural movement for the Atom Touch:

This goes beyond existing pattern recognition technologies, which are increasingly being used as advanced control systems for bionic upper limbs. For example, individual finger control means that the hand can form an unlimited number of grips, not just a pre-defined set of grips, as is the case with most bionic hand control systems.

Equally as exciting, the Atom Touch promises to revolutionalize the socket interface for upper limbs by using smart wearable technology. We’re not sure how this works but it apparently involves a special shirt:

…and the ability to fully interpret the user’s intent without requiring invasive surgery. Some patients may benefit from a minor outpatient functional enhancement surgery but they will not require implantable myoelectric sensors or neural interface surgery.

Of course, this all sounds fantastic, and no one will be happier than us if Atom Limbs brings these remarkable capabilities to market. But a bit of caution is in order here since we haven’t yet seen the Touch in action.

According to the company, users will position the Touch’s thumb the same way that they position a natural thumb — intuitively. And this will all be done electronically.

The Atom Touch will provide users with precise proportional control, aided in part by the Touch’s artificial intelligence capabilities.

The Touch will offer what is easily the most advanced sensory feedback system on the market.

As mentioned, this begins with Touch’s use of hundreds of sensors capable of generating four types of sensory data: contact, force, position, and velocity.

Here is a very short example of this technology:

Atom Limbs is also working on the ability to sense heat.

Atom Touch will allow users to move their elbow and wrist joints, if applicable, with the same intuitive level of control as the hand itself.

We do not have any concrete data on this claim, but Atom Limbs describes the Touch as having been built using “incredibly robust, resilient materials that stand up to all your normal daily wear & tear, day in & day out”.

Of course, we’ll know more about this when the Touch has been on the market for a few years and we start getting feedback from users.

The Atom Touch will have an IP rating of 67, meaning that it is totally protected against dust and can also be submerged in water for up to 30 minutes.

This makes it only the third bionic arm/hand to achieve this rating, matching that of the TASKA Hand and similar to that of the Vincent Evolution.

The Touch does not require a glove.

We do not yet have any information on the Touch’s batteries.

The Atom Touch will offer virtual training software for your PC or mobile software using macOS, iOS, or Windows 10.

Users can slip on an Atom Dot [an EMG cuff] and practice using a virtual arm even before they get a physical device.

We do not yet have any information on user software for configuring or calibrating the physical device, if any.

Suitability for Both Above- and Below-the-Elbow Solutions

The Atom Touch was designed from the outset to be a modular device with hand, wrist, and elbow components. We do not yet have any information on whether the Touch can be used by those who have undergone a full shoulder disarticulation or, if so, how this would be configured.

According to our information, the Atom Touch will sell for between $50,000 and $100,000 U.S. depending on which modular components are included in the solution.

As far as we know, the Atom Touch will be launched only in the USA in 2023. The company plans to expand to other countries soon after.

We do not yet have any information on the warranty for the Touch.

The Adam Touch is not expected to be commercially available until 2023. When it is, users can provide feedback via the short survey below.

We probably won’t have enough feedback to report results on the Atom Touch until 2024 or even 2025.

Considerations Before Buying the Atom Touch

Obviously, this is a new device, so some caution is in order.

On the other hand, the capabilities being described for the Touch are the most exciting in the history of bionic arms/hands, so a little optimism is warranted, too.

One of the things that gives us confidence in Atom Limbs as a company is that their management team has been completely open and transparent with us from the start. As a result, we are confident that they will make a genuine effort to:

…and that, frankly, is all that we can ask when a new bionic arm/hand first comes to market.

One final note: Atom Limbs has informed us that their beta prototype will enter testing at some point this year, so we should have a lot more to share after that happens.