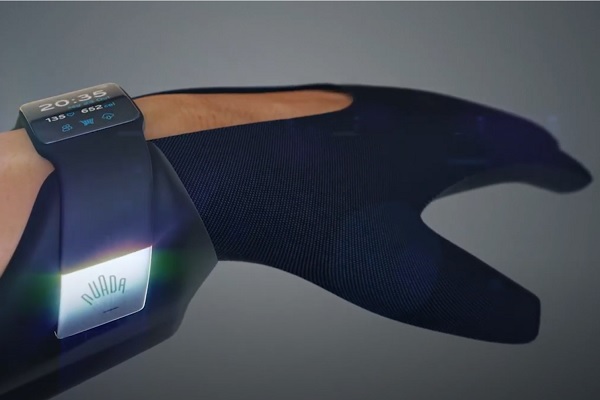 With its compact design and intuitive control system, the NUADA glove is the most exciting assistive hand device that we’ve seen so far.

A Quick Look at the NUADA Glove

The following video provides an excellent overview of the NUADA glove:

As the video explains, sensors in the glove detect the user’s intent through natural hand movements. The glove then supports these movements using artificial tendons sewn into the fabric. The control system, battery, and motors required to support this are all housed in the wrist bracelet that appears, from the top, to be just a smartwatch, though there is slightly bulkier housing on the underside of the wrist.

All and all, this appears to us to be a very thoughtful design.

It may seem odd to talk about grip patterns for a soft robotic glove, but the issue here is whether a device supports or limits all of the natural hand grips. For example, another glove, the Neomano, moves only the index and middle fingers, which it does in unison to provide a simple grip.

The NUADA glove does not impose these types of restrictions. It supports the independent movement of all five digits in a natural manner.

As mentioned, the control system is based on sensors in the glove that detect user intent via natural hand movements. However, the glove is not always active. To activate it, the user simply presses a button on the smartwatch.

Also, the artificial tendons never move the fingers on their own. Users must be able to move their fingers naturally even if they lack grip strength. Limited finger movement can be supported through calibration but this may require a special setup. If you truly lack the ability to move your fingers naturally, you may be better off with a device like the Tenoexo (if/when it is commercialized), which uses a combination of myoelectric sensors on the forearm and a more structured exoskeleton to help move the fingers.

When the user has gripped an object with the NUADA, the artificial tendons lock into place to support the full load. At this point, the user can relax his natural hand without losing his grip, which is only released when the user attempts to open his hand or if he releases the grip manually. However, there are some functions, such as operating a hand drill, that require the trigger finger (i.e. forefinger) to have full movement while the rest of the fingers remain locked. This is accomplished by moving a simple slider on the underside of the bracelet.

The NUADA does not support proportional force. It closes to support the user’s grip and then locks. If the user is unable to generate sufficient force to properly grip an object (for example, something heavy and slippery), the NUADA allows the user to ratchet up the grip force through a series of repeated movements. In an earlier version of the hand, the user did this simply by repeatedly flexing his wrist. We do not yet know if this movement or an alternative movement will be required when the device is formally launched in December 2021.

Sensory feedback is not provided by the NUADA glove. As the natural hand is still present, the user should still be able to rely on his natural senses.

The NUADA can hold up to 40 kilograms, which is impressive. This is equivalent to 392 Newtons of force. For comparison, the average maximum grip force for women is 292 Newtons, and, for men, 517 Newtons. The average grip force used in daily activities is only 70 Newtons.

Put another way, the NUADA appears to have more than sufficient lift capacity and grip force for most daily activities.

The estimated lifetime for the mechanical components in the wrist bracelet is 2 years.

The estimated lifetime for the glove itself is 6 months. Note that you can swap in a new glove at any time (i.e. the wrist bracelet will work with the new glove without difficulty).

Other than these estimates from the manufacturer, we don’t yet have any durability feedback from our User Satisfaction Survey. Given that the NUADA won’t be officially launched until December 2021, we probably won’t have any usable feedback for a few years.

As a textile, the glove handles both water and dust with ease. However, the bracelet is only water resistant. We do not yet have an official IP rating for either.

To help protect NUADA’s glove, you can wear another glove over it, though this is not required.

The NUADA’s battery lasts roughly 16 hours if opened and closed once per minute. As that equates to nearly 1,000 open and closes, it should be more than adequate for a full day’s normal use.

The battery is charged via a USB-C cable. We do not yet have a full recharge time for the battery if it is fully drained, but most users will simply fall into a cycle of using the glove throughout the day and recharging it at night.

There are two aspects of user software for the NUADA glove. The first are the settings that users can modify through the smartwatch component of the bracelet. The second has to with data collected by the NUADA on the glove’s usage, which the user can view through software application on a mobile device. We do not yet have details on either of these functions, though the potential value of the data collection for patient monitoring and/or rehabilitation is obvious.

You can also purchase it for $91.50 per month over four years.

Note, the Pioneer Pack includes the complete system (bracelet plus glove), as well as free replacement gloves at six and twelve months after purchase (for a total of three gloves).

We do not yet have a separate cost for replacement gloves but will insert it here as soon as we do. Also, we are currently working on a price list for all assistive robotic gloves and will place a link here as soon as it is complete.

For a complete list of prices for other assistive robotic gloves, please see our Assistive Robotic Glove Price List.

The NUADA glove appears to be available worldwide through direct shipment. However, we are working to confirm this.

The NUADA offers a 12-month warranty for defective parts, materials, or manufacturing, but not for wear and tear on anything considered a consumable, such as the textile portion of the glove.

Are you currently using the NUADA glove or have you used it in the past?

We do not yet have a sufficient number of survey participants to publish fair and accurate results for the NUADA glove.

Considerations Before Buying a NUADA Glove

Until this device is on the market for a while and we get some direct consumer feedback, we have very little to say about it except this: after working the past two years on bionic limbs, which are often unaffordable for the vast majority of people who need them, we are very pleased to see a device like this available for less than $100 per month.

Looking at this from the broader perspective of human bionics overall, the more times that the industry can help millions of people overcome a disability, the more it should become obvious to society (and governments) that we should be doing this for all disabilities as a matter of basic human decency.

Otherwise, it is fair to note that a company called Bioservo makes a competing assistive glove called the Carbonhand. Is one glove better than the other? We have no idea, as we’ll let real users answer this question as they fill out our User Satisfaction Survey.

For a list of competitor devices, see current options for assistive robotic gloves.

For a comprehensive description of all assistive robotic glove technologies, devices, and research, see our complete guide.