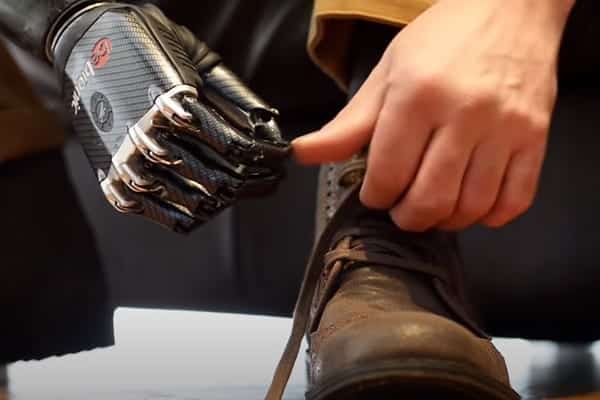 Tying shoelaces is a real challenge for bionic hands. For a hand to truly play its part in this task, it must be highly responsive with good dexterity.

Now that we’ve received so many “entries” for this particular bionic feat, we wanted to add a brief comment about it. Tying shoelaces is one of those tasks that depends as much on the skill of the user as it does on the technology. To learn something from these videos, i.e. to compare one bionic hand to the other, you have to ignore the techniques being used and focus on the responsiveness of each device when it is called upon.

Because we watch a lot of videos of bionic hands doing many things, we see significant differences in the responsiveness of some hands compared to others. But we’re not going to share that opinion because, after all, it is just an opinion. Instead, you be the judge! (Note, in keeping with our neutrality, the following videos are not in any particular order.)

COVVI may technically be a start-up, but they were founded by a group of industry veterans with a proven track record. We can’t yet say what the outcome of their efforts will be — that’s for end-users to judge. But we do have an expectation that their Nexus Hand will be a solid, well-engineered device, and that’s what we see here.

Who doesn’t love the Hero Arm? For children especially, receiving one is like getting an extra visit from Santa. Here, we see it performing an important daily task. For more information, see Open Bionics Hero Arm. Video source: individual.

The Zeus Hand is one of the more interesting bionic hands to hit the market in recent years. It is the least expensive component hand, i.e. one that can be combined with other components for above-the-elbow solutions. It also enjoyed a very professional rollout, which has impressed us as much with the organization as the hand. Video source: individual.

The i-Limb is one of the top-tier bionic hands both in terms of price and features. Here, it appears to be a little hesitant, but this may be due to the user rather than the hand. For more information, see Ossur i-Limb. Video source: manufacturer.

The Michelangelo is widely considered the most advanced bionic hand and is likely the most expensive. Notice the smooth movements, which are typical of this hand for many tasks. Video source: manufacturer.

The TASKA Hand is a very capable bionic hand with a mid-range price tag. But, here, it seems to struggle with this task. This isn’t something we normally say about the TASKA. For more information, see TASKA Hand. Video source: individual.

This video is a bit older than the others but shows better reliance on the bionic hand. We also happen to be big fans of the presenter. If you get a chance to hear him speak, don’t miss it! For more information, see Ottobock beBionic. Video source: individual.

This one is a bit of a different task than the others but still shows an over-reliance on the natural hand. For more information, see Vincent Evolution. Video source: individual.

All in all, it looks as if bionic hands still have a ways to go before they can tie shoelaces with the same dexterity as natural hands.